There's A Star Man Waiting In The Sky

Share All sharing options for: There's A Star Man Waiting In The Sky

Yes, it confirms what we already knew, but it's refreshing to actually read it in a sourced quote:

In [South Carolina defensive line coach Brad] Lawing’s opinion, the rating of players and the ranking of signing classes is a scam.

Lawing added that a danger of the rating systems is the fans are sometimes misled about the talent level of a prospect and a class overall.

"There are a lot of staffs getting fired for unrealistic expectations," Lawing said.

Again, this is no shock to anybody who follows college football recruiting, even on a passive basis. The star systems exist for exactly one reason -- to drive discussion and traffic on recruiting websites.  It's a creepy cottage industry that does nothing positive for college football*. And of course talking to "the right people" helps -- those people have a job to do and will bend over backwards to maintain their access, which keeps the Creep Train chugging along.

Yet, we still crave their information because, in most cases, Scout and Rivals are the most convenient place to obtain information about the kids coming into the program.  Oh, and it fills a void in the seven months without, you know, actual football.  (Unless you are going to head down to rural Virginia to check out that next can't-miss defensive end prospect, but you probably have an actual job / family / life.)

And what do we get out of the deal? Hundreds of incoming college athletes who have been spoiled and hardened by over-attention and harassing phone calls from recruiting gurus, resulting in pathetic press conferences and hat ceremonies for decisions which, in reality, mean very little. 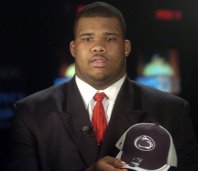 Also, a set of long-range expectations for coaching staffs, built on a fluid (if you talk to the right people!), yet crumbling foundation comprised of non-coaches evaluating five minutes of highlight footage against crap competition**.

Yet, we crave the information, just as people obsess over the MLB Hot Stove, NFL free agency, and so on.  We love the sport and need a pacifier in the months between January and August.  Recruiting is important -- let's not lose sight of that part, it's the lifeblood of the program and it's comforting to know that an incoming wide receiver can run forty yards in 4.42 seconds instead of 5.28 seconds -- but star rankings are a sham designed to increase revenue (and occasionally boost the status and access of craven, jock sniffing Notre Dame fanboys).  They're just piddling little data points, not proclamations from Football God.

* - In a sense, it's like the talking point among college football illuminati that argues against a playoff system because the current horseshit system generates so much discussion.  Yes, because it sucks.  Legitimate, widespread outrage is not a positive thing, people.

** - No slight on Mr. Dukes, who is likely to end up being a fine running back at Penn State, but come on, I think Wormser from "Revenge Of The Nerds" was a free safety in at least eight of those clips. 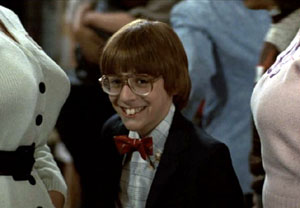