Yeah, You Told Us

Share All sharing options for: Yeah, You Told Us 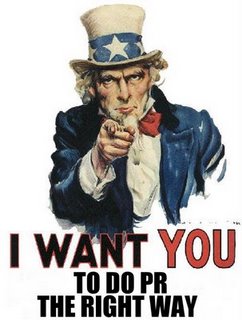 I'm generally okay with the shift in media from the musky newsrooms to, as they say, "the people, man". That's not to say I'm 100% happy about "the man" getting more attention, though. I'm talking about news and analysis from the very last place in the world you want it: the public relations department. Everything, by definition, is spin. And that means everything is probably a waste of time.

The problem is that not everyone is aware of what is going on here. The MLB probably gets the prize for most seamless transition; a large amount of beat reporting in baseball is now coming from writers who are paid by the league.

GoPSUSports is another example of the same concept, and along those lines we get hawkeyesports.com.

So H/T to the BHGP reader who found this chart and spin interesting:

The following provides evidence of the importance of continuity at the top of the coaching staff for the football programs in the Big Ten Conference. 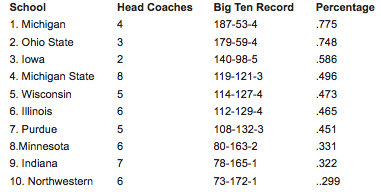 Never mind they have the correlation all wrong, you lose your coach because you lose football games, not the other way around, but why not get it all wrong in the name of agenda?

And of course we couldn't have a Big Ten list without this:

1. That it's still the Big Two and everybody else.

Anyone else tired of this? I don't mean to single TRE out, they are just piling on at this point, but does this have to be discusses in such broad stroke fashion ever time there is a list of Big Ten teams put together?

We get it already. Seriously.

And since we are essentially talking about this now:

Finally, and selfishly once again, adding a 12th team puts a huge damper on the meaning of The Game, ie. the first or second greatest rivalry in all of sports. I can’t imagine OSU v. Michigan not being the climax to the end of the conference season. I’ve heard all the different arguments - putting them in the same division, opposite divisions etc - I don’t want to hear it. The Game is the The Game. Please don’t mess with it. Ever.

And that, my friends, is exactly what Paterno is talking about when he says "it's a conference that's dominated by a couple of people." It's dominated by the people who think like 11W, who have this strange sense of entitlement and justify it by bringing up tradition and TV ratings.

What doesn't make any sense is this:

Although why have progress and look at the greater good when you don't have to.

But go Big Ten or something.