In news that wasn't news that shouldn't have been printed:

"We have sent letters to Ohio State, Michigan, Penn State and Oklahoma," [North Carolina Head Coach Butch] Davis said. "We've tried to reach out and get a future home-and-home series."

Which led me to be somewhat confused by the terminology "decent competition" as applied to a potential home and home with North Carolina.

In what way?  You know how many times UNC has had more than six wins in the last decade?  Twice.  The last time they won the ACC?  29 years ago.  Their all-time record against CUSA?  4-3.

So what's with this:

[T]his is a win-win situation for both schools....[G]etting a quality BCS conference team on the schedule can't hurt.

Why is this a win-win?  Is it because Penn State would get a potential win against a football team that has zero name-brand, give up a valuable road game, and play in front of a baby-blue out? 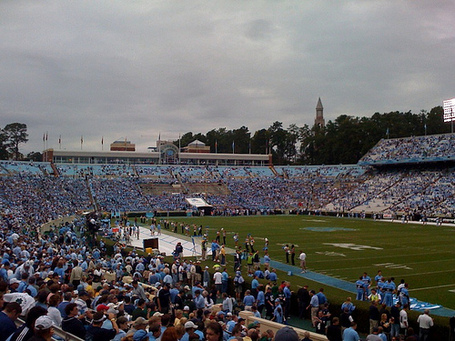 Thomas goes on to say that Penn State "isn’t going to schedule USC or Florida, we all understand that" and that "they need a quality school from a quality BCS conference."

Davis' move is hardly a decent offer, definitely not a win-win, and a lot like our basketball team offering home and homes with Duke, Kansas and, um, North Carolina and pretending it's a worthwhile offer.