Oh PR, You Fill Our Hearts With False Hope

Share All sharing options for: Oh PR, You Fill Our Hearts With False Hope 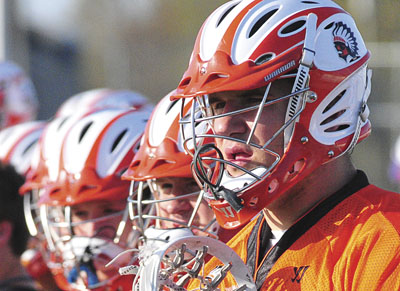 [Warning: Lacrosse post. And part of it is about Michigan.]

Blue-White Illustrated did a story about how well Penn State was recruiting in sports that didn't play in front of 110 thousand people.  Buried in that story was this blurb about the Men's Lacrosse team:

Coach Glenn Thiel signed a monster class for the 2010 season that includes nine players and two from lacrosse powerhouse Brother Rice in Bloomfield, Mich. All-Americans Nick Dolik (attack) and Danny Henneghan (midfield) will bring championship experience after leading Brother Rice to the No. 1 national ranking this year. Dolik led the way on offense, amassing 65 goals and 41 assists while Henneghan added 23 goals and 16 assists.

Lacrosse is an interesting sport in that just about all of the power is centered in Maryland, New Jersey and New York.  Teams like Penn State, Ohio State, and Notre Dame often compete, but when it comes to winning championships they are simply no match for the powerhouses out east.

Penn State is an afterthought and so Thiel needs to be creative when he recruits.  Getting these Michigan players is great, but there is a reason the national powers in college lacrosse are out east: that's where the high school talent is.

Now Brother Rice has been dominating their competition; according to these guys "in the Michigan lacrosse scene, it’s been Rice and then everyone else."  Great, but like, it's Michigan.

And how exactly does BWI get off calling Rice the #1 team in the nation?  Because, um... 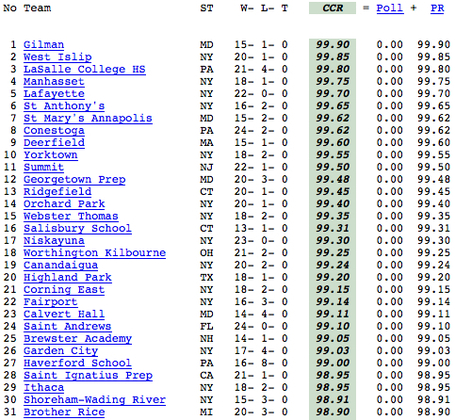 Now that's not a real poll, but rather a totally awesome national high school power ranking from a site called LaxPower (NCAA Men's and Women's rankings are also available).  As a long LaxPower addict, I warn you to click at your own risk.

Geekness aside: only historians in the great state of Alabama would ever consider Brother Rice a national champion.  They lost several games to teams in Ohio, which only placed one team in this top 31 poll.  It's not to say they aren't a very good lacrosse team, and that these players aren't elite, but let's be real: the PSU lacrosse team isn't a national powerhouse and they aren't recruiting like it either.

And while we are here: A Michigan varsity team? Our friends at Varsity Blue have been covering what is essentially the Penn State Icers of college club lacrosse.  The big question is whether the state of Michigan can support the varsity team that so many people up north desire.  The answer is pretty simple: without some type of major east coast pipeline, they don't stand a chance.

Ohio State, which is the only D1 lacrosse team in the state, has exactly five natives and one player from Michigan on a roster around 40.

Notre Dame, which generally speaking has major ties to the east coast but also a monopoly on the entire midwest save OSU, has just three players from Ohio and one from Michigan.

Penn State, which has the advantage of being quasi-east coast, has one player from Ohio and two from Michigan.

There are probably some Michigan natives out east, I don't feel like looking through any more rosters, but the point is a UM team would be competing with ND, OSU and perhaps PSU for midwest recruits and there simply aren't enough to go around (and keep in mind they don't stand a chance of picking up guys who Cuse, Hopkins or Maryland think are worth a phone call).

After that, it's sifting through the leftovers in Maryland and New York.  You can get in line back there behind Detroit: