Nitt Picks Is The Youngest Evah

Share All sharing options for: Nitt Picks Is The Youngest Evah 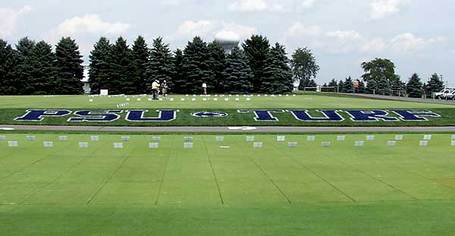 But first, this old drum.  SN is in the middle of one of those great conference-by-conference lists that will give you literally weeks of material.  Penn State was naturally 11th on the Big Ten SOS ranking,which is fine, but I'm mostly concerned with how he blurs lines in the rest of the article:

There's this little problem with a soft nonconference schedule: It only amps up expectations.

Case in point: Penn State. The Lions' non-con schedule is the weakest in the Big Ten, and the league schedule includes the other two top teams in the league (Ohio State and Iowa) visiting Happy Valley.

The concept behind this is 180 degrees wrong.  Is anyone here really excited because of the schedule?  If anything I think it deters from the season because, no mater talented the players may be, the story won't be the team but rather the schedule and how awful it is.

It's a failure to understand this point that will forever make media polls stupid.

And along the same lines:

I keep hearing about a step back for Wisconsin. Look at the non-con schedule—and how the league's rotating schedule is overly kind to the Badgers—and Wisconsin could be playing for yet another 10-win season in a bowl game. Northern Illinois, Fresno State, Wofford and at Hawaii are four winnable games, and athletic Penn State and Illinois aren't on the schedule. Three of the four toughest league games—Michigan State, Iowa, Michigan—are in Camp Randall.

Missing Penn State and Illinois don't make you a better football team.  We have actually gotten to the point where we think the pollsters are so stupid, though, that people at SN can write columns talking about how you better look out for Team A because they play Wofford and not because they might actually have, like, a talented football team this year.

Penn State Turfgrass Rules.  Local sports network MASN interviewed the heads groundskeeper at Nationals Park, who happens to be the youngest in Major League Baseball at age 26, and what was the first thing they talked about?

Interviewer: Now you did play college football under Joe Paterno at Penn State, that's gotta help you lead these guy out there on the field [as in the grounds crew on the baseball field -ed].

John Royse: That's correct I played for Joe Pa for four and a half years.  Just listening to him every day really helped me be mature and be a leader to the guys.

While we're at it.  As certified by JayTweet, "the nations newest law school building", which by now should have fully shed its brick skin. 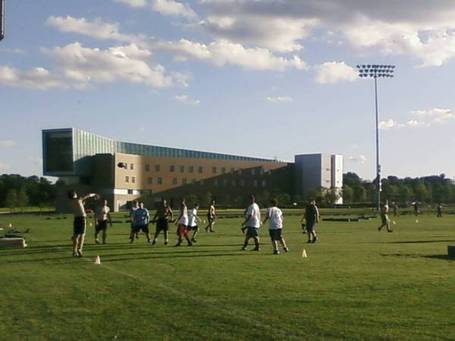 The hardest evah.  C&C backed into discovering another member of Penn State's basketball schedule: the Big South's Gardner-Webb.  He's got the numbers for you, a nice review of the rest of the schedule, and this good news:

In Scores of Other Games: Minnesota may have to get drunk before the game like the rest of us...it's Birthday Week at LTP...and ladies and gentleman, the Man Wall.