Nitt Picks Is Sold Out

Share All sharing options for: Nitt Picks Is Sold Out

Tickets.  With the shift from paper tickets to virtual ones, there was destined to be a bit of a drop off as the ebay crowd was gotten rid of.  And while we've gone over the lackluster non-conference schedule here in detail, it's worth pointing out that the former scalper-types could have gotten more than their money back out of the Ohio State game alone.  Throw in the Iowa revenge match-up and it's not a bad package.

Anyway, it was slower this year but corner seating is now unavailable.  There was this interesting chest-puffing line from GoPSUSports:

The nation's largest full-season student section in college sports again will be filled to capacity in 2009.

It makes me curious what a "full-season student section" is, although I can guess.  I suspect it's to differentiate from the Ohio State system, which is much more lame.  Buying "Student Tickets" means tickets to every game as long as they are these five:

vs. Illinois
vs. Wisconsin
vs. Minnesota
vs. New Mexico State
vs. Iowa

A list that is clearly missing USC, although Trojan tickets still appear to be available in a much more limited number to students.

Over-rated Linebackers BEGONE.  WWAHT details this year's version of the Ohio State linebacking corps, and you know Penn State's group is going to be special when even Buckeyes are saying things like:

Overall, there is nothing to suggest that this unit will be anything other than a solid Big Ten linebacking corps, perhaps even good enough to be the 2nd best in the conference behind Penn State's dynamite group.

So Woo Wooo LBU and all that.  It's actually a great breakdown, although I couldn't help but snicker a bit at this:

So how do I expect the group to differ from last year's? Well, Laurinaitis and Freeman were legends, so a bit of a drop-off is inevitable.

Freeman was a good athlete but didn't go until the 5th round, but I still scratch my head at the glorification of James Laurinaitis.  Plus gold like this only comes around once in a James Laurinaitis solo tackle, so I'm going to use this as another excuse to link it.

We'll talk about this more but, yeah, the PSU linebacking corps is going to be awesome this year.

(NIT) National Champions. The Banner in all of its glory: 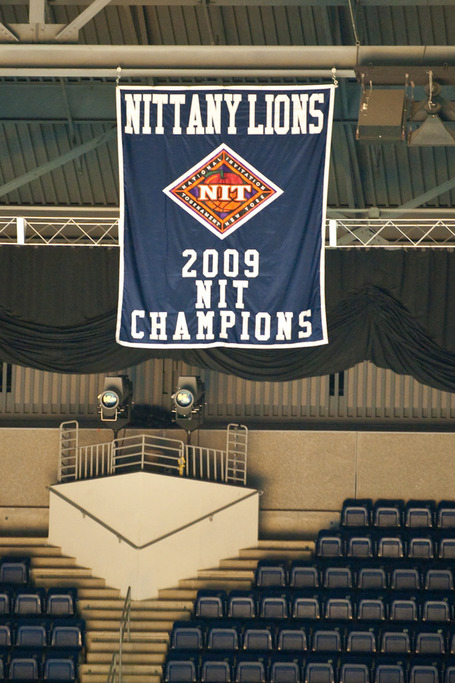 In Scores Of Other Games....JayPa is talking offensive trash.