Share All sharing options for: Announcing: "We Are Penn State" Preseason Magazine 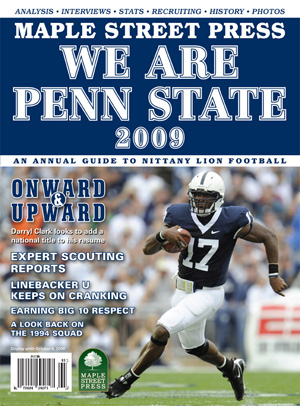 So I've been trying to keep this under wraps to surprise you all ninja-style, but there have been a few leaks here and there. If it seems like I've been preoccupied and not posting as much the past few months, it's because I've been busy as the editor of We Are Penn State, a 2009 Penn State football preview magazine being published by Maple Street Press that is due to hit book shelves this July. I've handed in the last of the material for print, and I see Maple Street is offering pre-orders, so I figure this is as good a time as any to make the big announcement.

We Are Penn State is 128 pages of Penn State coverage with information, stories, stats, and pictures without a single advertisement. In putting this together I assembled an amazing list of authors to cover Penn State football from every angle. Here's a list of what you'll read after the jump.

Sound interesting yet? Well that's not all. In fact there is a lot more. The magazine concludes with a special section devoted to the history and tradition of Penn State football. Whether you have been a fan for five years or fifty years, this section is going to bring back memories and fill you with Penn State pride. You will want to cherish this magazine as a keepsake just for this section alone.

You can probably tell I'm pretty excited about this project. It was a lot of work, but like this blog it is a labor of love for my fellow Nittany Lion fans. There is truly something for every Penn State fan in this magazine. This is the first year it's coming out, so I'm hoping it sells well and they ask me to do it again next year.

The publication will be sold regionally in the PA area, so look for it on bookshelves July 21st. If you live outside of the PA area or you just want to get your copy a few weeks early, please go preorder your copy now.