Summing Up The Parts Of The Offensive Line

Share All sharing options for: Summing Up The Parts Of The Offensive Line 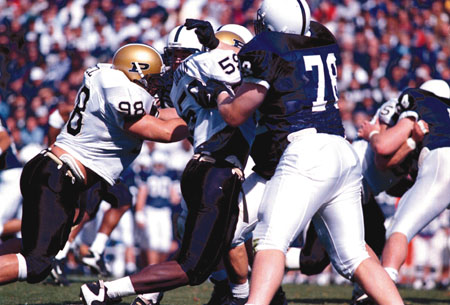 Where it all starts, as they say.

A large part of Penn State's success last year was the result of a very solid o-line.  Kinlaw took the majority of the carries in '07 and averaged 5.5 ypc; Royster was able to improve on that by a full yard last year.  Now no one thing can be credited for any single improvement, but it didn't hurt that three Penn State lineman made the All-Big Ten, with a fourth on the second team.

Wisniewski comes back from the second team but is moving over the replace one of the best centers in the nation last year.  And with one of this seasons buzz stats offensive line starts returning, it might appear on the surface troubling that Penn State is bringing back a league worst 39 starts.

But this is of course a stupid stat with no context.

So Steele comes to the rescue, kind of.  He listed his projected first four all-conference teams, and to arbitrarily score what he thinks of the Big Ten's upcoming offensive lines, I've scored them like so: a first team lineman gets you four points, second team three points, ect.

So there are potentially non-scrubs taking over, which helps us rationalize Penn State as the most inexperienced line in the conference.  Wisniewski, Landolt and Eliades are all expected to be very good at what they do.

But, it gets a little more interesting and a little less optimistic as the pages turn.  Steele then goes on to rank the lines as a whole, unfortunately without explanation, and claims Iowa as the best of the group (7 points above), Michigan the runner-up (3), and later Penn State (10), Illinois (5), and Indiana (3) all tied for sixth.

So what gives?  The two other projected starters, Stankiewitch and Pannell, are young (redshirt freshman and sophomore, respectively), but both come in extremely large and with three starts from the services.  They also have three full games to get their stuff together and are surrounded by what Steele calls the best group of three linemen in the Big Ten.  However to "score" Penn State a pretty distinctive (although admittedly highly un-scientific) first based on personnel but sixth based on overall skill means he must be highly discounting these two young players, which, I'm not sure I fully understand. I guess no experience means little to go on, but it appears the optimists have reason to express themselves.