Nitt Picks Will Not Take Those Odds

Share All sharing options for: Nitt Picks Will Not Take Those Odds 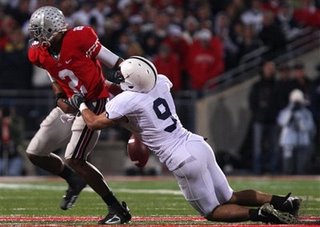 The new Heisman Pose?  Probably not.

I didn't know they still gave that thing out.  The Big Ten Bloggers voted in the unorganized, haphazardly way you would expect.  LTP tallied the results, and the main talking point seems to be this:

Heisman Hopeful: Terrelle Pryor
Yes, I know, not much of a shock here. However, as BHGP so eloquently pointed out in his unsolicited essay responses, "This can only go to an offensive skill position player on a high-level team upon whom his team depends at a surreal rate. This necessarily excludes all players but two: Pryor and Royster." It is scary to think we all had the same thought and the ballot box was almost unanimously either Pryor or Penn State's Evan Royster. The only non-Royster/Pryor ballot came from Enlightened Spartan who cast a lot for Juice Williams.

I would argue that Royster doesn't actually qualify; Green gets way too many carries for the former lacrosse player [/you've been espn'd!] to even get a mention.

I like this because it tells me everything I already knew about the Heisman: Clark was named first team All-Big Ten and didn't share snaps in his bowl game, yet he's a distant inclusion and not even BTBers vote getter.  Cue the June Heisman odds.

June Heisman odds.  If there is one thing this humble sports gambler will never bet on it's Heisman odds in June.  I would argue that, despite the defined purpose of the award, a player's "outstandingness" makes up about 7% of what it takes to win the thing, and therefore predicting who will win is a foolish exercise, weighted to screw the better anyway.

Apparently I'm not the only one who thinks Terrelle Pryor has a more than legitimate shot at the 2009 Heisman Trophy.

The odds for college football's most prestigious individual award have started to be released and Pryor is gaining some respect on a lot of sites around the net. BetUs.com and Sportbet.com have Pryor fourth on their list at +800 and +700 respectively....

A couple of things:

11W goes on to list five things he needs to do to pass the front-runners, which, like, if anyone were to beat USC, put up "Nintendo Numbers", and play for a team in MNC contention they would be giving a December speech in NYC.  That list is much less a Terrelle Pryor Checklist and much more a Heisman Trophy Formula.  And a good one at that.

Backhanded jokes.  OMG Four-star DE Dakota Royer did one of those interviews with the local paper where he lists his finalists and then gives little clips where he says the best thing he can about each one.  Penn State was "nice", and the best he had for the also-finalist Wannstedters?

Pitt — "It's pretty cool that the Steelers are right there."

Seriously.  I didn't make that up.

More in Schadenfreude.  I received an email notification about a comment left on Derrick Williams' Wiscy TD return, and, well, long live the bottom line!