Inside, Outside: Playing Thin and Bullies In High Places

Share All sharing options for: Inside, Outside: Playing Thin and Bullies In High Places 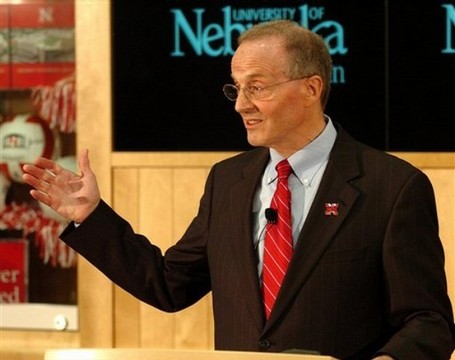 Nebraska chancellor Harvey Perlman explains to the
rest of us how we just don't get it, man. (AP Photo)

Somehow, "72 64 days until football" seems like a very short time, but it's still ten full weeks until Penn State takes the field against Akron.  Either way, football will be dominating every aspect of our lives before we know it, so it's time for your trusty BSD writers to pick at some issues that will not only impact Penn State, but the college football world at large.  It's a little something we'll call Inside, Outside.


Inside: Despite the title of 'Linebacker U", Penn State has been just as successful at performing on the defensive line.  However, with Evans and Project Mayhem now NFLin', plus additional injuries, is the defensive line a weakness in 2009?  And how thin is Penn State at the position, anyway?

RUTS: Pretty damned thin, L.J. Sr.'s unbelievable coaching success notwithstanding.  We're not "Defensive Line U" quite yet, but it's hard to argue with the results of the past 5-10 years.  For 2009, however, things may be difficult.  Jack Crawford is apparently on his way to being the next great Penn State defensive end, but he played very sparingly in 2008 (and didn't always look so great, although he was frequently lined up at DT).  His backup appears to be Pete Massaro, who also has next to no experience or not.  On the other side, we have Kevion Latham and Eric Lattimore.  By the way, if you are asked which of these four players had the only QB sack in 2008, the correct answer is Lattimore.  Basically, these four players have done absolutely nothing so far at Penn State.  Harsh, but true.  Lattimore had seven tackles in '08.  Crawford, four.  This...this is not good, which is why we're really going to have to count on the returning Jerome Hayes, he of the multiple ACL surgeries.  If he can provide some speed from the edge, Penn State might be fine.  Otherwise, our only hope is that our defensive tackles are so dominant that offensive lines will have to pinch down to protect against Odrick, Koroma, et. al. and leave guys like Crawford and Lattimore to fight against only the offensive tackle.

I suppose it's not completely out of the realm of possibility to have a Tim Shaw stand-up DE player in the mix (really, that's Hayes, but someone like Nate Stupar or Bani Gbadyu might be useful on third downs).  Otherwise, perhaps you'll see occasionally see one of those jumbo defensive lines with a natural DT lined up at DE.  Either way, this isn't an ideal situation.

Kevin: The question probably goes too far, but with the success of guys like Alford and Hali, along with the high draft status of guys like Maybin, it's no wonder we were all sweating bullets back in January.

History aside, my preliminary set of worries probably starts with the dline, specifically the ends. The inside appears to be on track, with Odrick and Ogbu back in front of Still and Koroma, but the outside looks unfamiliar at best.

I am most concerned because I don't want our All-World linebacking corp having to deal with a bad line. If the holes don't get filled it's not going to let these guys attack the ball the way they know best, and from there things could get ugly.

Outside: Despite being the new kid on the block, Penn State (depending on your opinion) either had the privilege or was forced to bear the burden of playing The Granddaddy this past January.  With those thoughts in mind, how seriously do you take this threat from Nebraska chancellor Harvey Perlman: "What I think most people don’t understand is that the alternative to the current system is not a playoff. The alternative to the BCS is going back to our traditional relationship with our bowl partners."

Kevin: My initial reaction is "yeah, screw it", I don't have anything vested in the new system and I sure as hell hate the politics that go down at the end of the season. You could argue that the voters actually have much more control than ever, especially the coaches who now want to pull the veil back over their ballots. And now that teams like Auburn of old and more recently Texas have felt the burn, who really loves this new system, anyway?

The only problem is that I'm not that crazy about the Rose Bowl under current conditions. USC is (repeatedly) the only team in the nation with negative odds to win their conference, and it's taking the fun out of it. The players complain about having to play in the Rose Bowl every year, well I'm complaining about having to watch them play in the Bose Bowl every year because they forgot to show up against Stanford.

So to answer the question: the threat is indeed hallow, and frankly I'm not sure there is much of a difference between the two systems.

RUTS: Hell, I welcome it.  At least we kind of knew what we were getting in that system and didn't have to put up with all of this non-stop lobbying at the end of the season by coaches, media, and conference commissioners.  If the SEC champion is automatically sent to the Sugar Bowl, great.  Put the ACC in the Orange Bowl, the Big 12 in the Fiesta Bowl, and the Big Ten and Pac Ten in the Rose Bowl (I'd prefer Tempe, but it'll never happen).  Oh, and the Big East can have the Meineke Car Care Bowl.  Okay, the Gator Bowl, but that's as far as I'm going.  And when the bowls all shake out, maybe then we could have a plus-one game for the national championship.  I don't know how how serious Harvey Perlman was when he suggested it, but what the hell, it could possibly warrant more than 45 seconds of consideration.