Nitt Picks Is Defiling Your Tablecloth

Share All sharing options for: Nitt Picks Is Defiling Your Tablecloth

New Becomes Old.  Bloggers heading to the Media Day was all the rage this year.  Hail To The Orange was hip to this, and came back with this awesomeness: 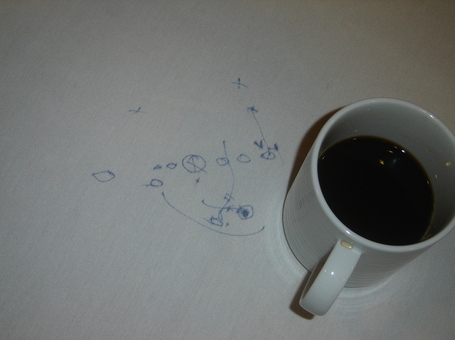 I'll let him tell the story:

(Note: All of this is paraphrase, not direct quote)

Joe wanted to show the reporters that the spread offense was nothing new, in fact according to Joe, "we were running it back in the '40s!"

Joe then proceeded to draw up an example of how he would run the backfield at Brown, drawing it up on the table cloth next to his coffee with a pen.

So after the room cleared out for the autograph sessions and banquet, I walked back over to the table and got this picture, evidence that the story is true.

What Media Day is really all about.  And Sean Lee had this to share about team meetings:

"Whenever we hear one go off, we start coughing to try to mask it," Lee said. "And he's like, 'What are you guys doing? Why is everybody coughing?' "

Last week, Penn State receiver James McDonald was kicked off the team after being hit with DUI charges. Now comes word that another Nittany Lion is facing similar accusations.

According to court documents, Ako Poti, whose actual first name is "Isaako," was recently charged with DUI. The Criminal Docket report filed in Centre Country says Poti faces charges of DUI, DUI with a high rate of alcohol (blood alcohol content of .10 to .16) and disregarding a traffic lane.

We'll keep an eye on this over the next day or two when we get some details.  But again, where are all of these people driving to?

In Scores Of Other Games...A bit old here but MnB thinks our Oline is garbage...DocSat on Paterno admitting (why is this news, again?) that Clark > Morelli...Smart Football on evaluating a running game.