Share All sharing options for: Nitt Picks Is Actually Kind Of Scared

I've searched the world over.  Talor Battle apparently got a little dose of the NBA, or at least something close to the Detroit version:

Climbing the podium to accept the bronze medal, Talor Battle wasn't expecting an ovation, but he thought there would be some applause.

Instead, the crowd of nearly 22,000 Serbians rained a loud chorus of boos on Battle and his United States teammates at the conclusion of the World University Games.

"They really don't like America, and when we only won bronze, I thought they would applaud for us," the junior point guard said. "We went to war against those guys. They hate our embassy. That was actual hatred. It was almost scary."

"The night we beat Serbia, they were throwing coins and gum. It was crazy," Battle said. "We won the game and got through the tunnel and got out of there."

That is kinda scary.  Not sure why whoever is running the World University Games is choosing to host the thing in countries that scare other nations and throw coins, but I guess it's their show.

Before you ask, ladies and gentleman, the Serbian dinar: 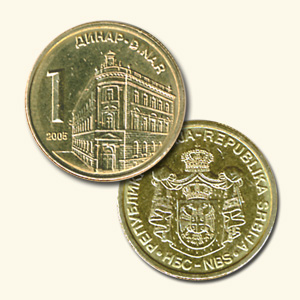 So who actually has selective hearing, then? The money quote from Joe all week, which at one point was the frickin' lead-in to Sportscenter, was this gem:

You guys have got to talk about something, fans have got to put something on those, what do you guys call them, Twiddle-doo, Tweedle-doo? I haven't got the slightest idea what you're looking at either.

JayTweet was apparently asked about it and had this reply:

Don't be fooled by Joe's professed lack of Twitter knowledge--he knows what it is & has a clear vision of what it can do.

and I imagine he does, because buried in the quotes that make him sound clueless was this one:

"My coaches are all involved with it," [Joe Paterno] said. "… We're in the process of trying to develop new ways of communicating, particularly in the recruiting area, and doing it legally, because a lot of the things they've outlawed -- [like] telephone calls at certain times of the year -- I imagine this could replace it."

Which apparently wasn't insightful enough in also be included in ESPN's lead.  Something about it being too "sportzie".

In Scores Of Other Games...Orson takes on the Bowden plan at SN...Cael Sanderson is slowly building his PSU empire....and a special THANK YOU for all of your hard work.