He's a quarterback killin', pool-jumpin' son of a gun, wooooooooo! 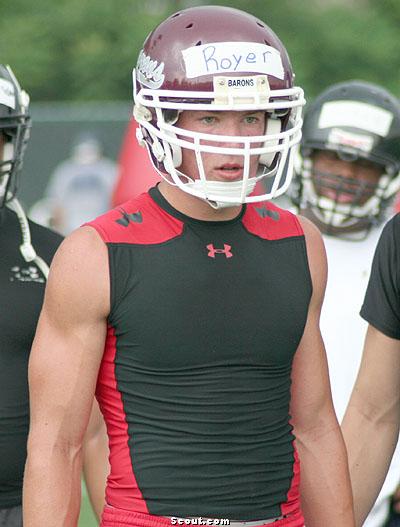 We wear pads and sleeves at this level, son.  Understood?  (via blogs.lancasteronline.com)

Manheim Central's Dakota Royer (4* Rivals, 3* Scout) has unsurprisingly selected Penn State.  This has been in the works for a few months and was never really in doubt.  Scouts Inc. with the love (Royer's on the ESPNU 150 Watch List):

It is pretty tough not to like Royer. This kid is a football player and fun to watch. Does not come across as the biggest kid on film, but his listed size is solid. He plays on both sides of the ball, but on defense is where this kid belongs. He most likely projects to defensive end where he plays in high school, but we would not be surprised to see him get a look at outside linebacker also in college depending on where he goes.

He has a good get-off and at times will flash real good quickness. He is a tough kid with that Pennsylvania blue collar feel to his game. He is physical at the point of attack and good with his hands. He can bring them, separate, and shed. Does a good job of coming across the ball, breaking down, and being able to shuffle and close daylight. Comes across as pretty heady kid with a good feel for the game and a nose for the ball. Runs well and has a great motor. He is a solid tackler though he does tend to overrun the ball and have to grab for cloth to bring the ball carrier down.

As a pass rusher you would not expect it, but the kid has some speed rush flare to him. He can get up-field, attack the outside shoulder, get some body lean, and turn the corner. He is active with his weapons and will work to battle and get free. Royer is a player and one of those kids who seems to just find a way to get things done. He mixes ability, with effort, and smarts and should be a good and productive college player.

And of course, the pool thing:

Dakota Royer jumps out of 4 foot pool! (via lowen4johnson)