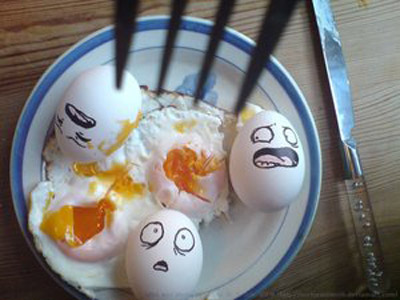 One of the most prominent themes throughout this offseason is the need for Daryll Clark to not sustain another concussion.  Fans forget that Clark has sustained three concussions in his short Penn State career, not just the one that took him out of the game in Columbus and left him bewildered and outraged on the sideline.  ESPN's Adam Rittenberg asked Clark about the concussion situation a few weeks ago:

How scary is that with the three concussions? You're still a young man. You know the statistics with concussions.

DC: It's kind of scary. Concussion, it's not fun, and it's tough to recover from. And also, it depends on how severe it is. Mine was a pretty bad one [last season] at Ohio State. You just be careful out there. You don't play timid like, 'Oh, don't do this.' You don't want to be too nervous where it takes away your game. Play your game, but just be smart out there.

Is that hard for you to change that, to slide more or go out of bounds more?

Of course, last year Penn State had Pat Devlin ready in the bullpen if something happened to Clark.  Devlin was essentially choice #1A for Joe Paterno last year, and you would be hard-pressed to find a closer or more controversial quarterback competition in Penn State's recent history.  At the very least, you have to go back to Casey v. Thompson.  You would also have a difficult time finding a better #2 quarterback anywhere in college football last year.  Now, Devlin is at Delaware, where he'll have a chance at two full years as a starter.  The safety net is long gone.

In case of emergency, the backup job now belongs to true freshman Kevin Newsome.  He's reportedly been seeing a lot of practice reps this summer, but remains a raw quarterback prospect that isn't quite ready to lead a team down the field with his arm.  After that, it's Walk-On City.  Given the relative inexperience at wide receiver, losing Clark could bring the offense to a screeching halt against any decent opponent.

Concussions are serious business, so those who are advising Clark to do everything he can in order to limit his exposure to a fourth concussion have his best interests in mind.  However, it is fair to wonder if all of the caution and discussion of the subject will have an impact on Clark's play.  Will it affect whether he scrambles for first down yardage on 3rd and 4?  Will it cause him to incorrectly perceive blind-side pressure when he's in the pocket?  Nobody knows, but if something bad should happen to Daryll Clark, the entire Penn State offense could be in for a world of pain.