We're down to the last two possible pitfalls for Penn State in 2009, and neither will be a surprise to anybody.  It's the offensive line and the secondary, and based upon the fact that the secondary will have all new starters and, you know, the Rose Bowl, the shuffling and replacing along Penn State's offensive line lands that unit at #2 on the list.

Okay, take a look at this picture of last year's offensive line.  That would be, from left to right, Dennis Landolt, Stefen Wisniewski, A.Q. Shipley, Rich Ohrnberger, and Gerald Cadogan. 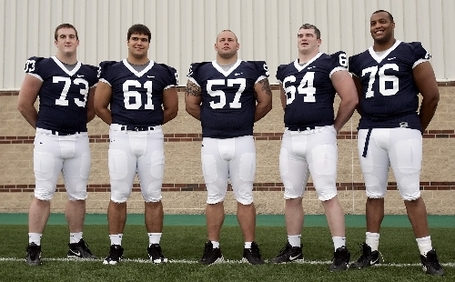 Now realize what has been done in the offseason.  Landolt switches from RT to LT, Wisniewski moves from RG to C.  The other three guys are currently in NFL training camps.  Consequently, Penn State's 2009 offensive line will feature five players who are either starters for the first time or starters learning a new position in 2009.  This...this is not good.

Truth be told, Landolt and Wiz should be just fine.  Landolt (Sr., 6'4" 303) has practiced at LT in the past (as Levi Brown's backup), and Wisniewski (Jr. 6'3", 302) is acknowledged as being so damned good that he's showing up on pre-season All-American and All-Conference teams as a center.  So let's take a look at the new guys.

Right Tackle:  DeOn'tae Pannell (So. 6'5" 313) is the starter.  He was originally penciled in as the left tackle until the coaching staff decided that moving the more experienced Landolt to LT was a better insurance policy for Daryll Clark's blindside.  The coaches like his footwork, but obviously don't trust him that much yet.

Right Guard:  Lou Eliades (Jr. 6'4" 305) appears to have nailed this one down.  Just when it looked like he might make a run at a starting position on the offensive line in 2007, injuries held him back.  He's healthy now, and gained experience in last year's Rose Bowl, when he played 31 snaps in place of an injured Landolt (knee sprain)

Left Guard:  Most people expected Johnnie Troutman (So. 6'4" 322) to win this position, but Joe Paterno was less than impressed with Troutman's conditioning and rehab of a hamstring injury.  Consequently, it seems that redshirt freshman Matt Stankiewitch (6'3" 290) is the guy.

The concerns about the offensive line aren't just with respect to the relative inexperience and lack of familiarity.  There is an alarming lack of depth, as well.  The primary backups appear to be the aforementioned Troutman, along with...well, not much.  And we don't really even know if Troutman can play.  Ako Poti (Sr. 6'3" 303) and Nerraw McCormack (Sr. 6'5" 279) were junior college transfers a few years ago.  They appear to be the emergency plan at tackle barring any hasty rearrangments such as sliding Eliades out to tackle and inserting Troutman at guard (unless true freshman Eric Shrive (6'6" 298) is ready to go).  The backup at center is...Quinn Barham (So. 6'3" 290), maybe?

So, yeah.  Depth and inexperience are issues here.  Penn State was lucky with a general lack of injuries along the line last year, and had an experienced, versatile guy like Mike Lucian to step in when necessary.  They'll need to be even luckier this season.