Share All sharing options for: Fear This: Chris Jacquemain 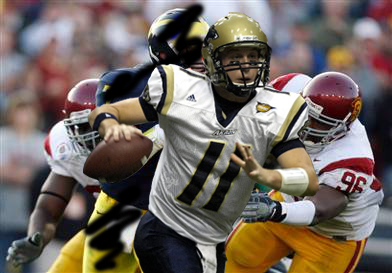 Chris Jacquemain in the 2007 Rose Bowl

Editors' Note: This was originally designed as an ongoing preseason thing, only to be interrupted by the season.  With no promises whatsoever about consistency, I'll save it for a player on any given team who might warrant a little extra attention.  [Previously: Benn and Decker]

Do you want Fryes with that? Despite the SoS punch line that Akron has become, the school actually has a decent history of developing statistically successful quarterbacks.  Butchie Washington was one of them, a one time school record holder, and also brought you this hilarious quote from an otherwise very interesting story:

During the summer, Butchie brought home a picture of LaVar Arrington, Penn State's monster outside linebacker.

"Mommy, you see this guy right here?" Butchie asked his mother. "He is going to be after me. They tell me that this guy jumps over everybody to get to the quarterback."

Edna didn't know what to tell her son. She just gave him the best advice she knew.

"Butchie, the only thing I can tell you to do is run for your life," Edna replied. "Run for your life, baby. Drop the ball, do something. I don't care what you do, as long as you don't let him hurt you."

Jacquemain seems to be of the same cloth as those that came before him.  He tossed for 2,748 yards with a 20-14 ratio.  He gets two solid options back in Deryn Bowser and Andre Jones (1 & 2 in WR team yards last year), plus benefits from two of the better lineman in the MAC in tackle Corey Woods and guard Zach Anderson.

Akron's record was doomed by a troublesome defense, finishing in the 90s in points and yards allowed; this largely overshadowed his strong performance against most of the conference.

He had his high points, though:

Played what head coach J.D. Brookhart said was Jacquemain’s "most complete game" at Wisconsin, completing 22-of-36 passes for 227 yards and two touchdowns with no interceptions.

Which probably looked better at the time.  And:

Backed that performance by being named MAC East Offensive Player of the Week in the Zips’ win at Syracuse.

So he has BCS conference experience, even if that statement comes with caveats.

You may remember me from such filmstrips as Locker Room Towel Fight: the Blinding of Larry Driscoll. You'll never believe this, but YouTube is a bit light on quarterback highlights from the 59th most efficient quarterback in the nation that played for the 5th best team in the MAC East.  Sorry?

MAC-Sports: If you can have one animal be extinct, which would it be?

Or three animals, whatever. That's the highlight from the interview.

The Penn State Extrapolation.  This has turned into a bit of a chronicle but there are two major themes here:

For all our worries about the secondary, and I think my concerns are a bit higher than the mean, how far down the chain are we really sweating here?

Fear This? No, but mostly because it's Akron.  Here's what I like, though: the quarterback is talented if perhaps a bit over-matched.  The receivers will be comfortable and confident after last year's success.  At least half the line is considered good at what they do.  All of this means our Wallaceless secondary will get a bit of a test so long as our thin but nasty front seven don't completely dominate from the get-go.

It should be interesting.  I guess that's all I'm saying.