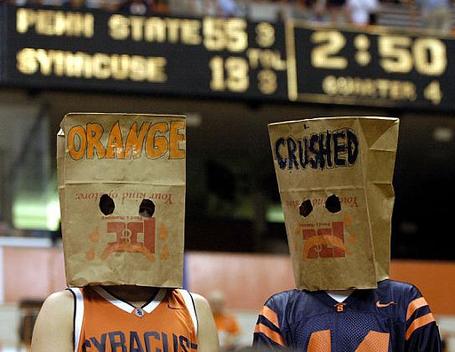 It's part two of the most anticlimactic rivalry renewal in the history of eastern football.  After an encouraging OT loss against Minnesota, will the Orange actually compete?

Against Akron in the second half, Penn State became some odd combination of satisfied, lackadaisical, and vanilla.  Won't happen again on Saturday for two reasons -- the coaching staff won't allow their team to think such performances are acceptable, and Joe Paterno really hates Syracuse.  Exhibit A: last season's 55-13 pasting in the Carrier Dome, with Paul Cianciolo chucking it around late in the fourth quarter.  Syracuse may be improved, but that doesn't make them good.

Poor Doug Marrone. You spend all summer stressing over the week two matchup with Penn State. You watch film...hours of film. You look over the depth chart. You see Penn State is rebuilding their offensive line and breaking in a whole new set of wide receivers. So you think to yourself, "If we stack that box with eight guys and slow down that running game...and maybe we can contain those wide receivers...maybe we can pull this out?"

And then Daryll Clark goes out in week one and looks like Tom Brady out there throwing for 353 yards and three touchdowns without getting a speck of dirt on his jersey. And your own defense couldn't stop Eric Decker who caught nine passes for 183 yards even though everyone in the stadium knew he was the only weapon Minnesota has in the passing game. So now what do you do?

Syracuse won't be able to stack the box like Akron did. After the show Daryll Clark put on in game one, Marrone will have to play the defense honestly by playing the run and pass equally. This should open up the field for Penn State to utilize their talent advantage and do whatever they want to do on offense.

And I don't see anything in the Orange offense that scares me. They only managed 90 rushing yards against a defense that was pretty average at stopping the run last year. Greg Paulus showed a lot of leadership and energy against the Gophers, but at times he also looked like he was running for his life. Jared Odrick, Ollie Ogbu, and Jack Crawford will show him terror like he has never seen before.

Another September game, another blowout preview.  The thing is Syracuse has done everything they can to spice this up. GERG was banished.  Paulus comes in as a former blue chip.   They gave a Big Ten team some competition in week one.  Yet I still have no faith that they will be able to compete for 60 minutes.

Penn State looked uninspired against Akron, but I don't expect to see that tomorrow.  Syracuse is not only a BCS team but one Paterno doesn't really care for.  I won't predict as high of a score as last year, but I do expect to see a lot of Newsome and even some passing attempts by the true freshman backup.  And frankly he needs them.