Share All sharing options for: The Daryll Clark Heisman Watch 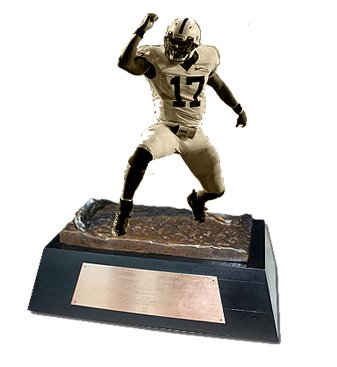 Though Penn State's rushing offense has been the object of much scorn these first two games, Daryll Clark is quietly on pace to have a record setting year. Through two games Clark has completed 49-of-71 passes (69%) for 593 yards and six touchdowns with only two interceptions. If we project those numbers out over a 13 game season, he is on pace to achieve some eye-popping numbers.

If Clark can maintain this pace he would smash just about every single season school passing record you can think of.

School records are nice, but Penn State fans have longed for another Heisman Trophy on display in the Penn State Sports Museum. As you know, it has been 36 years since John Cappelletti gave his memorable speech at the podium of the Downtown Athletic Club in his powder blue tuxedo. It has been seven years since Larry Johnson was the last Nittany Lion to even get an invite to the ceremony. (BSD - Why Michael Robinson didn't get an invite in 2005 is beyond me.)

So could Clark's projected numbers be enough to bring home the bronze statue? I don't know. So much of it has to do with your team record and how many other candidates come from your geographical area. One thing that Clark has going for him is that he plays the right position. Eight of the last nine winners were all quarterbacks. Just for fun, here are the final statistics for the last four Heisman winning quarterbacks. (Note: Bowl game stats included)

If Clark can maintain the pace he is on, and the way the running game is shaping up it's looking like he will get a lot of attempts, his numbers project to be right there with past winners like Troy Smith and Matt Leinart. He'll have to keep the interceptions down which I'm confident he will do since you could make the case the two interceptions he has thrown this year were not his fault. Bradford's numbers are ridiculous and we'll probably never see another stat line like that at a BCS school for another 50 years. And Tebow's numbers from 2007 aren't amazing, but keep in mind he had 800 yards and 20 touchdowns rushing the ball that year. Clark is not going to duplicate that.

Obviously, there is a lot of season left to play. The big thing all of the previous winners listed above had going for them was that they were calling the signals for championship caliber teams. In order for Clark to have any chance, Penn State has to keep winning. Drop even one game and he's done in my opinion. And you can also add to that that the Big Ten has to appear respectable. Larry Johnson got snubbed in 2002 because he didn't show up in the big games. Clark needs big games against Iowa, Michigan, Ohio State, Michigan State, and Illinois.

He also need some help from geography. Tebow will certainly lock up all the first place votes in the south while Colt McCoy will steal a good share of the votes from the southwest. USC is rebuilding with their quarterback so the west coast vote is up for grabs. If Clark can take the midwest by storm and lock up the northeast vote, he has a good chance of at least getting an invitation to the Downtown Athletic Club in December.

We will continue to watch Clark's numbers and compare them to others getting Heisman consideration as the season progresses.