The Still Life: Man Piles and the Goalline

Share All sharing options for: The Still Life: Man Piles and the Goalline

Today, and in the coming weeks I am going to take a closer look at several key plays from the previous game. This week we are going to focus on the run game. Through two "cupcake" games this year the Nittany Lions offense has had one glaring problem: the run game. For a 21st century Lions team to not run the ball effectively is abnormal. The list of 1,000 yard rushers in blue and white this decade is littered with names. Seemingly Evan Royster was going to add his name a second time this year, but through two games he has a dismal 102 yards on 26 carries for a weak 3.9 yards per carry average. Many folks are pointing to the offensive line as the main culprit; others say that teams are looking to force the Lions to throw to beat them. In the coming weeks we will look extensively frame by frame and see exactly why a play succeeds or, in the case of our first play, fails.

You might remember this play from Saturday: The Lions are on the goal line, looking to increase their lead and put the game out of reach. But on 3rd and goal from the 1 they are stuffed. Here is the play: 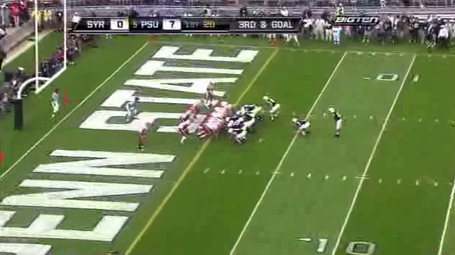 Here we can see the alignment on 3rd and 1. Penn State is in a two tight end, wing right I formation. The obvious strength of this formation is the straight ahead power run game, and anything that goes to the right.

Syracuse is in a gaps defense: meaning there are 6 defensive linemen and they are all lined up in the A, B, and C gaps, the outside contain is being taken care of by the safeties that are on the outside shade of the tight ends. There are also three line backers stacked over the top of the inside lineman to take care of any jumpers, or to flow to anything outside. 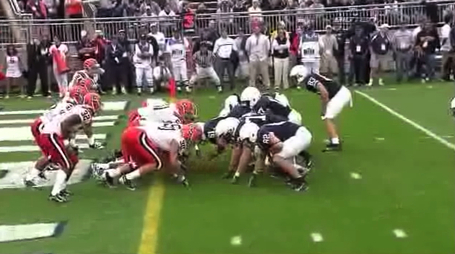 Here is tight look at the play pre-snap. Notice how the eyes and feet of the Orange's defense are focused in the backfield. They are playing the run all the way. 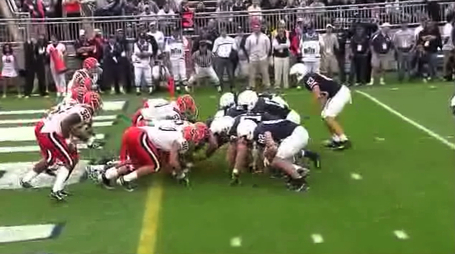 Here is the spit second after the snap of the football. At this point the Defensive linemen are all diving to the ground to "crab" technique the offensive line. This will theoretically clog up the gaps and force any inside run to bounce out side or go over the top. Notice the pad level of the offensive line. It is noticeably higher than the defense. The one key player to note is Andrew Lewis # 51, who is aligned in the A gap. 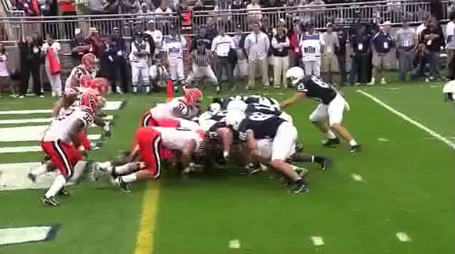 Now we can clearly see the crab technique employed by the defensive linemen. Take notice of the pad level. Who is lower? As a trench player, foot alignment and leverage are your two most important tools, the offensive line has just lost the leverage battle. There will be minimal forward movement, which means any attempt to score will have to go over the top. This brings us back to Lewis # 51, on the previous screen shot we could see his pad level rising; now we can see him getting over the top of Wisniewski. What this does is forces Clark to move to his right A gap in an attempt to break the plain of the goal line. 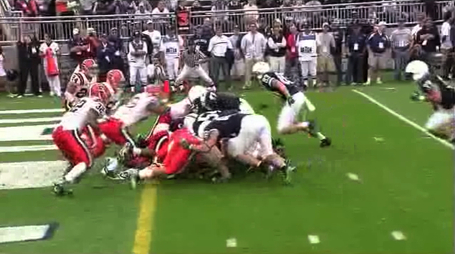 From this picture we can see the ultimate demise of the play. The left outside linebacker, whom I believe is # 49 Adam Harris, reads the play and sees Clark move to left. Harris is already flying forward; you can see him as the blur just inside of Doug Hogue #32. When Harris commits to the sneak Clark has to provide more forward momentum for this play to get to the end zone. 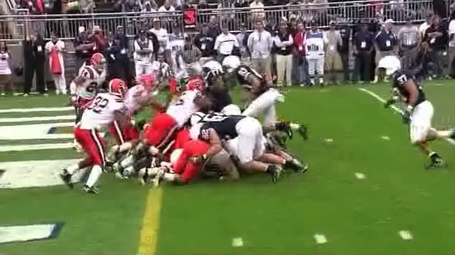 Now we can see the stuff. The offensive line is now useless as it has broken down into a one ton pile of humanity and is acting only to stuff the running lanes at the line of scrimmage not in the end zone where this pile needs to form. Harris has now hit Clark square in the chest, and since he came at Clark full speed from 3 yards back he has more momentum. 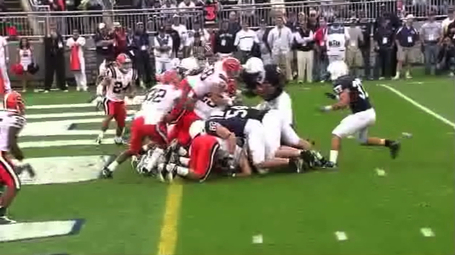 Here we can see Clark try to bounce it outside to make something happen, but before he can get going he is walloped by Mike Stenclik # 58. This play is done. 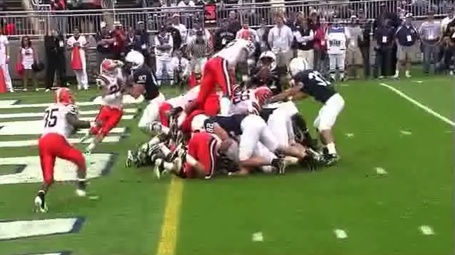 Now we can see the aforementioned Hogue #32 piling on just to ensure there is no score. The only offensive player in the end zone is Bracket the wing who drove his safety three yards into the end zone.

So that brings us to the ultimate question why did this play fail? I think the pictures show it all, the offensive line lost the leverage battle and Syracuse created a pile that forced Clark to readjust and then get cleaned up by the three linebackers. Frankly, if the PSU coaching staff knew the defense was going to crab and create a pile, this was a bad call. Something off tackle to the right would have been a better option and would have allowed PSU's better athletes a chance to exploit the defensive alignment, and lack of speed on defense. Instead PSU played right into the hands of the defense and lost out on 7 points.

I hope this offered a good look at the failure of the play, and I hope you can understand the complexities of the game after reading this post. Please post any questions you might have about the play, I will try to answer them the best that I can throughout today and tomorrow.