Nitt Picks Can Taste It

Share All sharing options for: Nitt Picks Can Taste It

Ah yes, the cryptic pressers.  Paterno had his weekly press conference yesterday and the news was mostly of the standard variety.  Some things of note:

FWIW, the general disagreement is that there are other hours that aren't practice that may or may not have been implied as practice hours in that Freep story that everyone is all huba-huba about.  Joe doesn't really address that here, but he did do something you would expect from the champion of the Grand Experiment, something that is kind of getting lost:

Eric Thomas has more bullets if you're interested, and tPN as well.  As always the full presser is here and game notes for those interested.

Let's hear it.  Your Saturday announcers will be Matt Devlin, Glen Mason, and this guy (H/T: AA): 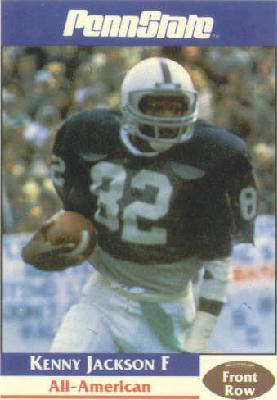 But they don't take themselves too seriously.  The NYT did a story on The Bowdens and they were able to fill up almost the entire thing with arrogant quotes.  Terry Bowden came out firing:

"This game ain’t over yet," said Terry Bowden, who starts his first season as the head coach of Division II North Alabama on Saturday at Southern Arkansas. "There is nothing less important in life than the score at halftime. Well, it’s halftime with the Bowden family. I’m ready for the second half, and Dad has a finish on his career that has yet to be written."

"Who else has three family members that coached teams that were undefeated in Division I? Who else had a father-son coach at the same time, or coach against each other? Nobody, and they never will. Who has 70 years of head coaching in one family and 500-and-something wins? Darn it, heck with y’all."

And this is too perfect:

Bowden has signed 25 Division I transfers to help make up for the loss of 15 starters from last season’s 12-2 [North Alabama] team.

Seven transfers are on the roster from Florida State alone, including Preston Parker, a leading receiver for the Seminoles in 2008. He was dismissed from Florida State after being arrested and charged with driving under the influence. That came after an arrest on drug and weapons charges prompted a two-game suspension to start the season.

So we can add this to the list: who else is building a D2 program on the backs of Criminoles who somehow build a rap sheet that FSU couldn't even take on?  Nobody.

"We’ll go up against anybody right now, and we’re going coaching," Terry Bowden said. "We’re not apologizing for nothing."

Of course you're not.

One game at a time.  No need to worry about 2010 draft picks now, but you kinda already have a feeling it might end like this way:

Royster said he would consider leaving early even if he isn't evaluated as a first-round draft pick.

Don't let it come to this. Rittenberg on Penn State's week one:

Whether it's fair or not, everyone expects a blowout here, and Penn State needs to deliver. The Lions' schedule forces the team not only to win, but win in very impressive fashion.

There is no question that it isn't "fair".  It's not fair to the winning team, who should only ever have to win, and it's not fair to the paycheck team, who just want to get their money and save face.  No one benefits from 70-point blowouts unless pollsters decide they'll start factoring that into their vote.  They don't have to do this.

And besides, while games have gotten lopsided at times, Paterno is not the kind of guy to keep the starters in and throw bombs in the 4th quarter of a 30-point game.  If the only way Penn State can "win" is to win by eight touchdowns and three field goals every week, I don't like our chances.

It's brilliance.  Nothing to add:

That's TNIAAM, but you knew that.  He's full of satire this week.

In scores of other games...RmN's computer likes Penn State...pure gold for Onion fans courtesy of BHGP...Bowman fluff, it's good for you.