Share All sharing options for: Wrap-Up: Don't Look Now But The Big Ten Isn't That Awesome

Iowa rebounded nicely from their week one near-disaster with a shellacking of "rival" ISU and quality win against Arizona. The defense was solid for the Hawekeyes; they gave up just 94 second half yards, 8 first downs all game, and held Arizona 2-12 on 3rd downs.

The offense was competent enough to take it from there. Stanzi turned in his worst performance so far but managed semi-acceptable 6.4 YPA. Non-sack rushing put up 4.3 per carry. They were methodical, picking up 19 first downs along the way.  Frankly, I'm more concerned about the upcoming night game than I was at any point during the summer.

With USC looking about as mediocre as anyone can remember the last two weeks, I'd hope that Cal can capitalize on an opportunity to be the elite team in the conference for the first time since the 50s.

Jahvid Best is being mentioned as a darkhorse Heisman contender in this, the year of the Unwavering Preconceived Notions, which speaks to just how impressive he's been. Best finished the game with a 5 yard average and 5 touchdowns. Or, put another way: all of Cal's points touchdowns if you want to be technical about it.

Eric Decker, who we've talked about, continues to be the only thing of note going on at Minnesota other than their awful uniforms and enormous jumbo-tron. He's getting 138 yards per game and averaging 15 yards per catch. Find a shut-down corner and the Gophers might not be able to score on you.

Notre Dame has experience in the passing game that can hurt teams, but it proved especially annoying for Michigan State. The Sparty defense finished 8th in passing yards allowed last year in the Big Ten, had the 7th worst average per attempt at 6.6 yards. This year things seem worse: they are giving up 7.1 per attempt with a bad to awful 66% completion rate.

And then there is this, which, I mean:

Defense was supposed to be the strength here, what with a brand new quarterback and no Ringer to speak of, but they've given up 29 and 33 points to two unranked teams so far. 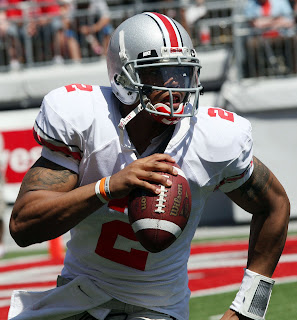 Ohio State finally "rolled," as they like to say on ESPN, in a Toledo "home" game played at Cleveland Browns Stadium.

Tressel took a lot of heat for not properly using Pryor against USC, an accusation I think was wildly exaggerated, but he sure got the sophomore plenty of touches against Toledo. Pryor passed for 262 yards, but remained his erratic self with two picks along the way. He also led the team with 12 rushes and more than doubled the next highest Ohio State rusher's total yards.

It seems clear that Ohio State won't be able to properly replace Beanie Wells, which was a tall task to begin with but one I think most fans hoped could be accomplished considering the team's recent recruiting. Its seems that, for the offense to continue to grow, Pryor needs to either improve on his passing or take over 55% of the touches like he did last weekend.

Purdue tricked us during the first two weeks of the season, pretending to have a running game and then competing with Oregon on the road. Turns out maybe Oregon isn't a world beater and Toledo doesn't have a very good defense.

This was no fluke, either: Northern Illinois won the first down race 23 to 14, the (FWIW) time of possession 42 to 18 and the total yardage 454 to 335. Throw in a +1 turnover margin for the Huskies, and this probably should have been more lopsided.

So much for "but Akron really has a great rush D." They gave Indiana 180 yards on the ground, a 5.5 average -- both more impressive than what Penn State accomplished.

But this probably isn't a fair criticism. I suspect Akron came in with a more balanced game plan, and while Penn State was sitting on the ball in the second half, Indiana was forced to continue the attack on account of giving up 21 points to a MAC second stringer after Chris Jacquemain was suspended for a violation of team rules.

Oh, and it didn't hurt the Hoosiers that the previously mentioned back-up threw 4 picks and just one touchdown.

People liked Northwestern this year because they appeared to have put together a decent offense behind Mike Kafka. Those people were wrong, but it wasn't because Kafka isn't a good passer. He's got 740 passing yards already and a 74% completion percentage.

The problem is that Northwestern has no defense. Towson was a push-over, but Eastern Michigan, by far the worst of the Directionals, put up 320 total yards in what was almost a second-half comeback.

Perhaps Paulus is simply getting more comfortable, but his numbers were far better against Northwestern than Syracuse's other two Big Ten opponents: 24/35, 246 yards, 2/1 ratio. He nearly doubled his YPA average and gained more yards through the air than against Minnesota and Penn State combined.

Checking in with: Eastern Illinois. They've tallied three wins so far on three tries: blowouts against Illinois State (1-2), Indiana State (0-4, so much worse than the real thing), and a comfortable win against SE Missouri St. (1-2 including a 70-3 beating from Cincinnati). They just might be the best team in the Ohio Valley Conference, for whatever that's worth.