You Can't See Nitt Picks Because Of All The Smoke

Share All sharing options for: You Can't See Nitt Picks Because Of All The Smoke

Program-S.  Plural, we're not singling anyone out here. 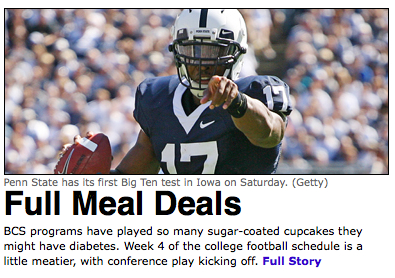 Or are they just confused? Is was a morbid picture of the linebacking corp after Joe's presser, what with comments like this one:

While Bowman is more likely to play, Lee is doubtful.

"Navorro was out there and practiced for about a third of the practice (Monday). I'm anxious to see how he feels today. You don't want to stick him in there when he's really not 100 percent."

But then what's with this Josh Hull quote?

"If [Bowman's] health continues to be as it is today, I'd expect him to be starting Saturday," Penn State linebacker Josh Hull said.

And then this one printed this morning:

Hull said no one should assume at this point that Lee and Bowman will be sidelined or hindered by game time.

"If they chain him to the bench," Hull responded when asked if he thought Lee, who missed all of the 2008 season while recovering from a torn ACL, would be held out against the Hawkeyes. Of Bowman, Hull was somewhat more optimistic, saying, "It's going to be exciting to see him out there again. He brings some leadership to the huddle. He's a real explosive kid that can make a big play at any time."

It's all very confusing, but either way I'd be surprised if we don't see a lot of Bani Gbadyu and (even more of) Nate Stupar. Both are young, and so both are guys Paterno is "worried" about.

I know Iowa has some injuries of their own, but we're talking about a pretty important part of a defense that hasn't really been tested yet. Here's to hoping the secondary will show improvement this week because the linebackers aren't going to be cleaning up as many messes this Saturday as they did during the pre-season.

Vegas Sez.  The line, which opened with Penn State as a 10-point favorite just about everywhere, is starting to drop down to 9.5 at some places.  This is not a good sign when you consider Penn State is the one taking all of the action, but then again it's still 9.5 points.

The total is coming out around 40, which is staggeringly low.  They haven't predicted a Penn State game this low scoring since the 2007 Ohio State contest.

Times set. Your Illinois game the week after this one will be the ABC 3:30 contest, broadcast on ESPN out of market.

An interesting exercise in incentives. A minor league hockey team spent the season claiming an average attendance of 5,841. Then something funny happened: the league demanded a cut of all playoff tickets. The average attendance during the playoffs? 2,347, or about half.

Why do I bring this up? Mostly because it would be an interesting way to get actual attendance for football games in a world where the numbers have become glorified pissing contests between the biggest stadiums.

According to the NCAA, Michigan averaged about 108,500 fans for each of its home football games last season. Penn State ranked second with about 108,200 per contest.

TNL got mad about this last season:

It's no mystery, we don't need a team from CSI to painstakingly sift through the remains or Jack Bower's terrorist interrogation methods to find an answer when you schedule absolute [/grandkids] TEAMS for OOC home games people aren't going to come...

Point taken, and I've changed my opinion a bit after these last three sleepers, but we aren't talking about ticket sales here, or even a number under "capacity."

This is standard language just about everywhere. So: what is the point of counting these guys? If one school claims higher attendance when in fact everyone averaged higher than capacity, aren't they really just saying they have more hot dog venders?  So like, gradulations.

In scores of other games.  Norwood was cut by the Browns but picked up by the Eagles...the College Football HOF is moving from South Bend to Atlanta, or so the AJ-C is reporting (H/T: SB).