Grading The Offense: Nittany Lions Put The Turd In Saturday

Share All sharing options for: Grading The Offense: Nittany Lions Put The Turd In Saturday

Seemed like it would be a pretty easy night after that first offensive play from scrimmage and the 20-play, ten-plus minute field goal drive, didn't it?

First, the drive chart (from espn.com): 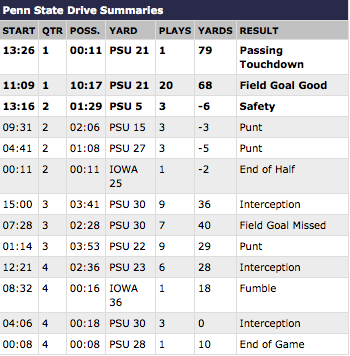 When you hear the old cliche about football games being won in the trenches, Exhibit A should be Saturday night's game.  On the 20-play drive, Penn State wasn't necessarily dominating Iowa's defensive line, but was certainly getting a consistent push.  That trend slowly eroded toward the end of the drive, as Iowa generated increased pressure on Clark when Penn State entered the red zone.  You can see what happened throughout the rest of the game.

Quarterback Grade: D.  The numbers are horrific. 12/32, 198 yards, 1 TD, 3 INT.  The opening strike to Chaz Powell was a thing of beauty, and Clark was perfectly fine on the field goal drive.  As Iowa began getting pressure on Clark, however, he clearly couldn't deal with it.  By the second half, Clark was simply imagining pressure in the rare instances that Iowa's defensive linemen weren't in the backfield.  This led to a number of plainly awful throws on what should've been relatively simple throws.  Even on Clark's final interception, which was deflected at the line by the tenacious Karl Klug, Clark tried to impossibly fit the ball into an area between three Iowa defenders.  It never would've had a chance even if Klug didn't get a piece of it.  Clark remains an above-average college quarterback, but he just doesn't perform well when things start to break down around him.  Too many physical and mental mistakes under pressure.  He's not a superstar, and it's time to acknowledge it.

Running Backs Grade: C-.  Royster ran for 69 yards on 17 carries, but his fourth quarter fumble squashed Penn State's last, best chance at tying the game.  It seems that the lack of blocking has taken its toll on Royster's decision making, as well.  He's known for making the right cut at the right time, but it's not happening for him so far this season. His mishandling of a short Clark pass led to a backbreaking interception. Stephfon Green got a few series as the feature back.  Nothing really happened.

Offensive Line Grade:  D-.  Yes, Iowa deserves credit here, but it's hard to oversell how awful Penn State's offensive line was in the final three quarters of the game.  DeOnt'ae Pannell was utterly owned by Broderick Binns on two plays, the second of which led to Iowa's safety.  Nerraw McCormack came in for Pannell on the next series and promptly drew a holding penalty that wiped out a big gain to Derek Moye.  Stefen Wisniewski often looked lost, and his shotgun snaps are still consistently low, making Clark work a little harder to scan the field.  His move to center seems like a worse idea as the weeks go by.  This section could go on forever, so here's the summary:  too often, the offensive line doesn't know who to block, and when they do know their assignments, they aren't getting the job done with alarming frequency.  Temple caused them problems, so it's no surprise that Iowa blew them up.  Spells big trouble against a team like Ohio State.

Wide Receivers:  B-.  Hard to get a read on their performance because there were so many breakdowns by the offensive line and quarterback.  Chaz Powell created nice separation on his long touchdown catch and run.  Derek Moye still looks very, very good.  Everyone else was missing in action.

Coaching Grade: D.  Hey, it's easy to say that the players on the offensive line aren't getting the job done, but it's up to the coaching staff to get the proper personnel on the field and make adjustments in protection.  That never happened.  Passing plays often too slow to develop, given the pressure that was being put on Clark.  A stunning lack of emotion on the field, even when things were still going well.

Next Week:  Illinois' defense was bad before they lost Martez Wilson for the season.  If Penn State can't move the ball and score points against them, start planning on a third-tier bowl game in Orlando or Tampa.