Share All sharing options for: Meet The New Walk Ons 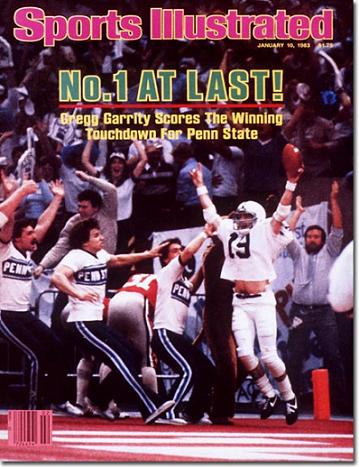 Most of them live anonymous lives. Nobody knows them when they walk across campus. They never get interviewed. Nobody writes articles about them. Nobody cheers their names on Saturday. They were stars in high school and could have gone to some Div. IAA school. But they chose a more difficult path. They chose to pay their own way to chase their dream. Some of them want to play against the best. Some of them just dream of donning the Blue and White.

Some of them make it and become stars. They are the Greg Garritys. The Ethan Kilmers. The Deon Butlers. The Josh Hulls. And yes, the Graham Zugs. But most of them come and go and never see the field. They come and go, and throughout it all, nobody knows their name. Though they bust their butts day in and day out on the scout team helping the first stringers prepare for every game, they don't get the recognition they deserve. Except for today.

Sadly, Google and YouTube searches for Nick Delligatti turned up only this.

Andre Dupree starred at linebacker and fullback for North Point high in Waldorf, MD in leading his team to their first ever SMAC championship. He did pretty well averaging 4.91 yards per carry and recorded 73 tackles on defense. When he decided to join Penn State as a preferred walk on he had this to say.

Dupree, who made his mark primariy at linebacker and running back while helping lead the Eagles to their first-ever SMAC championship this past fall, had other options in the Division II and III ranks, but felt the decision was an easy one after visting Happy Valley.

"After going up there, I just wanted to go there after seeing it," Dupree said. "The atmosphere, it's a real high-intense football game. I know it's going to be really challenging. I like challenges."

What can you say about a long snapper? Not much really. So watch this first ever highlight film of a long snapper (now with NFL films dramatic Super Bowl music!)

After watching that highlight I'm surprised President Obama himself hasn't asked Mr. Etter to fly across the world and fight the terrorists with his projectile weaponry of mass destruction.

There's also a much longer 10 minute highlight film I didn't post here. You can find it pretty easily, if you're the kind of sadistic freak that can stomach watching ten minutes of long snapping highlights.

Sadly, there is no highlight film of Mr. Fuhrman. I know, shocker, right? Booooo!

I can't find much on Hill's quarterback skills, but apparently he's a pretty good baseball pitcher who is also playing on the baseball team.

Notable: Hill is one of the most phenomenal athletes in this year's senior class. He went 8-1 with a 0.75 ERA in 462/3 innings and struck out 52 hitters. He also hit .396 with 11 doubles, two home runs and 29 RBIs. One of his best games was a two-hit shutout against rival Grapevine in district play.

Did you know? Hill, who is also a quarterback, is headed to Penn State to play football and baseball.

He competed in the Kirk Herbstreit Varsity Football Series in Texas and did pretty well.

Hill, known perhaps better around the Lone Star State for his baseball prowess, completed three of his touchdown passes to longtime receiver pal Brandon DeFrance, who finished with eight catches for 177 yards.

Here is a site that has some nice recaps of his games.

Kelly threw for 1249 yards and 9 TD and was named second team all conference as a junior. I can't find anything on his senior year, so maybe he was injured and we got a steal?

I looked everywhere and I can't find anything on Mr. Kenney. I mean nothing. Which makes me think he might be related to this guy.

J.R. is pumped to be going to Penn State.

"I have been bleeding blue and white my whole life," an ecstatic Refice said. "I've always wanted to play at Penn State. I went to the spring game last year and I went to the Purdue game as a recruit.

"They told me I'm a little short to be a scholarship athlete, but once I got into the school, they asked me if I wanted to play. I'm going to give it a shot."

How can you not pull for a kid like this?

"No matter how much I think about it, it is still a surreal feeling," Refice said. "I know being a preferred walk-on is going to be 10 times harder than anyone else on the team. Working to get there is worth it all.

"I've always wanted to work hard. If the chips don't fall your way, that's all right. I would love to see the field, but I just want to help out and work hard.

Tongue is a talented receiver that was invited to appear in the Empire Challenge New York City All Star game. In his junior year he caught 40 passes for 367 yards and 5 TD. You can see a highlight video here. Tariq suffered an ankle injury his senior year that made a lot of teams go cold on him. So there's a good chance we're getting a diamond in the rought here. His father, Al, is the defensive coordinator at John F. Kennedy High which has produced current Penn Staters Stephfon Green and Stephen Obeng-Agyapong.

I looked for stuff on Venuto. Apparently he's a pretty good lacrosse player. So he and Evan Royster should have plenty in common. If you're counting, that's three walk on quarterbacks in this class. Do ya think the coaches were looking for some insurance after Pat Devlin left?

Zerbe was a standout fullback and linebacker for Wilson High in West Lawn, PA. Cue the obligatory tape.

Zerbe recorded 90 tackles and six sacks on defense. He comes from a pretty athletic family and background. He reportedly saw some interest from Pitt and Tennessee, and he hits like a Mack truck.

So there you have it. Is there a Deon Butler or a Josh Hull in there somewhere? Time will tell. Good luck, guys.