Rounding Up: The Cupcakes Stare Back Without Fear

Share All sharing options for: Rounding Up: The Cupcakes Stare Back Without Fear

A few Big Ten teams didn't have any problems with their sugary treats.  Michigan showed signs of resurgence in routing Western Michigan.  Sparty and Northwestern throttled their respective opponents by a combined 91-17.  Penn State and Purdue rolled to comfortable halftime margins and cruised to easy victories.

But for the rest of the Big Ten, especially Iowa and Ohio State, it was a little more...tense.

Some highlights from around the conference:

Military Intelligence:  According to the Navy broadcast from Columbus, the Middies' epically failed two-point conversion was the same exact play they ran successfully during last season.  When the Navy announcers looked over to the Ohio State coaches in an adjacent press box, the coaches were signaling to each other as if to say, "yep, we knew that was coming."  It's hard to be too optimistic if you're a Buckeye fan, though.  Too many arm tackles on defense, and it's fair to begin wondering if Jim Tressel has any control over Terrelle Pryor.  The Navy announcers mentioned that, with Ohio State leading by 15 points, Pryor was stomping around on a 4th and 2 at the Navy 15 with less than seven minutes remaining, demanding that the Buckeyes go for the first down.  A 32-yard field goal absolutely ices the game.  Tressel is a conservative, bright kind of guy, right?  But he elected to go for it, Ohio State got stuffed, and Navy connected on an 85-yard touchdown on the very next play.  And I don't even know what the hell this is all about.

Shock Blocked:  You'll not find a better recap of the almost-debacle in Iowa City than Oops Pow's effort over at BHGP.

Iowa is expected to rocket up the Top 25 this week, as theirs was easily the top performance in the land this weekend. After all, it's generally agreed that championships are more important than mere bowl games. Northern Iowa plays in the Championship Subdivision, and Iowa in the logically inferior Bowl Subdivision.

Indeed, it was almost Cupcakes Rampaging Your Cities And Womens time for the Hawkeyes, who had to block two last-second UNI field goals.  They take on Iowa State on Saturday, and should take heart in the sad, sad fact that UNI finished 21 31 spots higher in the 2008 Sagarin ratings than the Sucklones.

Bag It, Tag It:  Tea Time in the United Kingdom is generally between 3-5 p.m.  Teabag Time is overtime in the Carrier Dome.  Greg Paulus actually played rather well in his first start at Syracuse, until an utterly awful interception on Syracuse's overtime possession.  But hey, the Orange looked like a completely different team from last year's squad, so good on them.  We'll have more on SU later this week, obviously.  As for Goldy, well, not so great.  Eric Decker was amazing, Adam Weber struggled (19-42, 1 TD, 1 INT).

Colonel'd:  Indiana sure tried to keep Eastern Kentucky in the game on Thursday night, but the Colonels fumbled their best chance away inside the IU five yard line and never could get it back to a one-possession game.  EKU is a solid enough FCS team and it's only one game, but you're pretty safe in not expecting great things from the Hoosiers this year.

And By "Most Improved", He Means "Still Crappy":  Purdue blasted Toledo, who Phil Steele named as one of his Most Improved Teams before the season (sure, they were 3-9 last year, so there was just a little room for improvement).  Also mentioned in the MIT category: Temple, who lost to Villanova last week.  Regardless, Purdue was shockingly prolific on the ground, as Ralph Bolden ran for 234 yards and the Boilers ran for 315 as a team.  Toledo gave up 535 yards overall.

They're Not Saying "Boo", They're Saying "BOOOOOOOOOOOOO!":  Bad Juice showed up for Illinois, and Bad Juice with an injured Rejus Benn is a chronic impending disaster for the Fighting Zookers.  Sweet, merciful crap, this game was ugly.  Most people were pretty sure that Illinois' defense would be bad-to-awful.  It was more along the lines of "pathetic-to-invisible".

Forcier Equals Accuracy:  Nothing but candy and flowers for Michigan in their 31-7 win over Western Michigan.  Funny what some decent options at quarterback will do for a team.  And suddenly, there's a ton of national interest in this week's game against Notre Dame.  And there was was this:

In Scores Of Other Games:  Wisconsin 28, Northern Illinois 20; Northwestern 47, Towson 14; Michigan State 44, Montana State 3.  I have absolutely nothing to add. 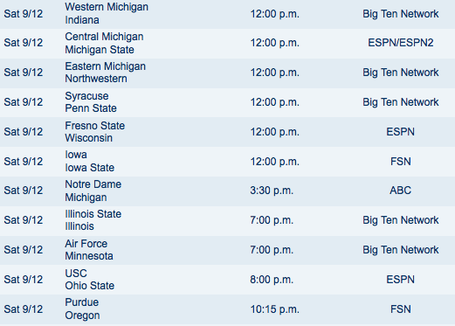 Half-Baked Observations About Next Week:  Surprisingly interested in a lot of these games.  There's added intrigue in Ames, Ann Arbor, Columbus, and even Eugene based on week one performances.  Oregon looked pretty awful offensively against Boise.  Can Purdue outscore them?  No idea what to expect from Iowa-Iowa State.  ISU has a surprising amount of success in this series, considering the national reputations of the two programs.  Ohio State is probably in trouble.  Hope I'm wrong about that, because an embarrassing loss will cement the Big Ten's reputation for 2009.