Icers Start the Second Half

Share All sharing options for: Icers Start the Second Half

With the holidays in the rear-view mirror, the Icers were prepared to take on the second half of the season of hockey. The Icers would open with a couple games before classes began - one at Pittsburgh's Mellon Arena against Robert Morris (PA), and then a Saturday home game against Washington & Jefferson. After these bumps in the road, the Icers would start the first of four straight tough weekends - starting with a home set against rival Ohio. 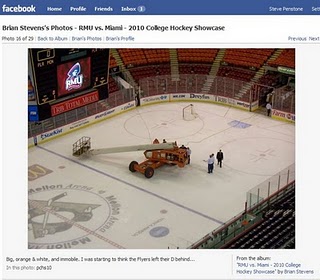 Ok, even as a Flyers fan, that caption is hilarious.

January 8, at RMU, 3-2 W - What was slated to be a real game in an NHL arena turned into a delay and an exhibition game that didn't count towards the standings. Thanks to some technical issues with the scoreboard (and the above-pictured crane), the game was delayed and had to be cut for time issues. So instead of the normal 3 20-minute periods, the two teams were forced into an exhibition game consisting of 2 15-minute periods. Keeping this short, RMU scored in the first period, then Timmy O'Brien would tie it up and Paul Daley would give the Icers the lead late in the game. RMU would tie it up with under two minutes left, but Paul Daley's centering attempt just a few seconds later would deflect off of an RMU player and into the net, giving the Icers the 3-2 lead and win. Overall, the play wasn't pretty, but it's understandable when it's the first game back from a long break and the game doesn't count for anything. Hopefully play would pick up for the next day's game at home against W&J.

January 9, vs W&J, 5-3 W - With the exhibition out of the way. the Icers looked to really get the 2nd half of the season going. They would get the Washington & Jefferson Presidents - a team against whom the Icers have a perfect 11-0-0 record. The first period started shaky and W&J would take an early lead. From there, the Icers would control much of the offense, taking a 20-6 shot advantage in the period. But all the shots only led to one goal for the Icers - Paul Daley would get the Icers on the board to tie the game at 1-1. The 2nd period started with a flurry of mistakes from the Icers. W&J would score two goals in the first 5 minutes of the period, giving the Presidents a 3-1 lead and running Teddy Hume to the bench (replaced by John Jay). After fighting off a 5-3 man disadvantage, the Icers would finally start to make some offensive strides. It started with a couple of posts before Kurt Collins would finally cut the lead to 3-2 with less than 4 minutes left in the 2nd period. Dominic Morrone would continue the scoring just 30 seconds later giving the Icers the 3-3 tie (and exploded the scoreboard briefly). Keeping up the pressure in the 3rd, the Icers would finally take the lead thanks to a goal from Paul Daley, 6 minutes into the period. Eric Steinour would extend the lead to 5-3 with a shorthanded goal a few minutes later. Both teams would get a few more chances, but the Icers would hold on for the 5-3 win. Kudos to John Jay for coming in and shutting-out W&J for his 35 minutes of play. And kudos to Paul Daley for his 4 goals in the two games over the weekend.

January 15, vs Ohio U, 3-1 W - In a flip from the norm, the Icers hosted rival (#2) Ohio University in January to really get the second half of the season under way. The players were amped, the fans that sold out the . And the Icers wouldn't disappoint. After some energetic action at both ends of the ice, the Icers took the lead halfway through the first period on a great one-timer from Kurt Collins to Nick Seravalli, with Seravalli putting it past OU goalie Paul Marshall. Ryan Paradis would put home a Dan Loucks pass on the power play just a few minutes to extend the lead to 2-0. But the Bobcats reminded the Icers why a 2-0 lead isn't safe. Just 16 seconds into the 2nd period, OU would get one behind Teddy Hume, cutting the lead to 2-1. Some questionable officiating (a regularity with this rivalry) gave OU some great power play opportunities, but the penalty kill units and Teddy Hume were up to the task. While the Bobcats would carry most of the pressure in the period, they could only get that early goal in the period and setting the stage for an exciting third period. And while there was some back and forth action, the fireworks wouldn't happen until the final 3 minutes, when George Saad would give the Icers an insurance goal, leading to a 3-1 Icers win.

January 16, vs Ohio U, 3-2 W - The final meeting of these two rivals this season saw lots of end-to-end action early on, as both teams realized the importance of getting ahead quickly. However, unlike the previous night, a defensive turnover by the Icers on the power play gave OU the chance they needed to take the 1-0 lead. Paul Daley, picking up where he left off last weekend, made sure the lead was short lived, scoring a few minutes later to tie the game at 1-1. Pressure in the final minute of the period gave Joe Zitarelli the chance he needed to give the Icers 2-1 lead after one period. The second period started out much like Friday's game, with OU getting most of the pressure and eventually scoring early to tie the game at 2-2. It was another penalty-filled 2nd period for the Icers, but the penalty killers would once again be up to the challenge, keeping it a 2-2 tie after two periods. After some more opportunities for both teams, the Bobcats looked to have grabbed the lead about halfway through the period. But that goal was waved off, as the refs deemed it was knocked in by an OU player's hand. That no-goal for OU would be the break the Icers would need, as Tim O'Brien would knock home a shot rebound to give the Icers the 3-2 lead. The Bobcats would get a few more chances, but Teddy Hume would stand tall again, giving the Icers the 3-2 win and the weekend sweep over Ohio. Important stat of the weekend: Penn State was 11 for 11 on the penalty kill. That's a lot of opportunities for OU that the Icers held the Bobcats silent. 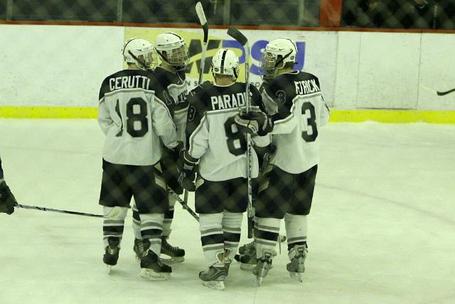 Reflections and Ramblings: Lindenwood remained #1 in the rankings, with Ohio jumping to #2, even though OU swept Lindenwood at LU. But the ACHA coaches haven't always been the brightest group when it comes to voting. (Yeah, I said it.) Looking at this coming up rankings, Penn State could jump as high as #3 (Illinois lost to Robert Morris (IL), which won't look good). Either way, the Icers are in a good position heading into the final push of ESCHL games.

Speaking of which, the next two weekends find the Icers mostly on the road against ESCHL foes. Next weekend is a home-and-home series against West Chester. They start Friday at West Chester (9pm start), and then head back to Happy Valley for the normal 3:30pm start on Saturday. It should be noted that the Ice Line in West Chester is the site of the last Icers' loss in the ACHA, back on October 17th. The following weekend finds the Icers on the road at Delaware for the final set against the Blue Hens.

Also in interesting news is the hopeful addition of live streaming video to the Icers webcasts. There has been a generous donation made to the program of some new video equipment to help with this cause. They will test it out during this week, hoping to have the video ready for Friday's game at WCU, or at the very least, Saturday's game at home. The video should be free for the rest of this season, with future seasons' costs being determined by any donations made towards this cause. Either way, it'll be nice to have streaming video of the games for once. Steve Penstone will continue to do his announcing via these webcasts.

In Lady Icers news, they had the unfortunate task of facing a very talented URI team - twice before break, twice after break. And, sadly, they dropped all 4, dropping the record to 5-5-1. On Saturday, they would take on the JV team at Elmira College (they have a pretty good D-III women's team, FWIW) and pulled out a 3-2 win. Doesn't count towards the ACHA standings, but hey - it's a nice win nonetheless. Up ahead is an ugly stretch of games, starting with a game at Robert Morris (IL) on Thursday, followed by two games at #1 Lindenwood on Friday and Saturday, and then a final game back at Robert Morris on Sunday. Here's to hoping they can salvage some positives out of an otherwise ugly-looking 4 day stretch.