Share All sharing options for: Tabloids: Please Go Away

In my idle Internet searchings the other night, I came across this image on Bitten and Bound, which I'd previously never heard of before. 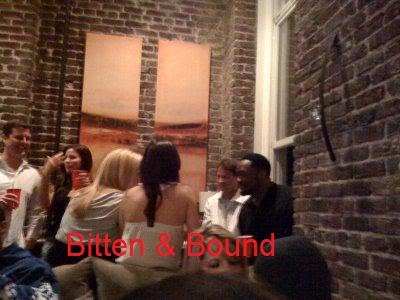 The above photo was taken at a party in the spring.  It shows Lane Kiffin, Pittsburgh Steelers  coach Mike Tomlin, and Kiffin’s brother-in-law David Reaves chatting up some co-eds.

According to sources, former Tennessee head coach Lane Kiffin fraternized with co-eds often, and did more than just knock back a few beers with them.

...and went onto explain that in his time in Knoxville, Kiffin owned a "rendezvous place" that he used to meet college girls.

Lane Kiffin has been dealt a justifiable amount of heat lately throughout the college football world, and when I saw this, I was ready to post it here on BSD for another open season on the man before I thought better of it, and decided to yield the decision to the rest of the BSD team.  They decided it probably was a little too sleazy for the site, so the story never ran.

Then the other day, I came across THIS fine image and explanation... 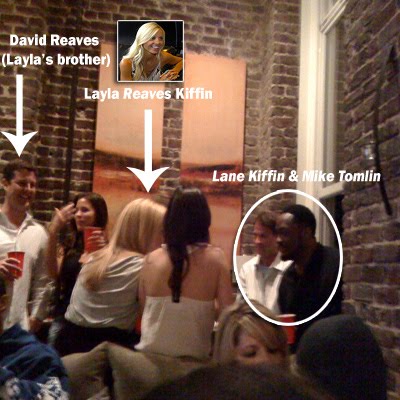 Many around the web are saying that the photo indicates Kiffin partying with UT coeds with his wife Layla nowhere in sight. Along with this "evidence," many message board posters and bloggers are accusing Kiffin of additional sins, along with the obligatory cries of a coverup by the Knoxville Police.

I don't want TMZ Sports.  Heck, I don't even want Bitten and Bound OR SPORTSbyBROOKS for that matter.  We've already seen the tabloids tear down Tiger Woods and Alex Rodriguez.  We've seen the tabloids expose modern athletes for transgressions in their private lives that'd have gone unnoticed in the past, and it's wrong.

Hollywood OMG CELEBUTARDS live for this kind of thing.  They spend three months working on a movie, and spend the other nine on red carpets and getting in trouble around Los Angeles to get their names out there.

Athletes work throughout the year, whether playing in season, or training out of season.  Athletes face the public in stadiums around the country.  Athletes face the stress of needing to win.  To be short, athletes, while in the public eye, are in it for completely different reasons, and under completely different circumstances than the celebrities these sites and publications were started for.  Athletes legitimately have to face the world every night they do their jobs, which is something celebrities in their Hollywood bubble probably couldn't even begin to understand, even if they come from humble roots.

All I care about is what they do on the field.

Sports fans aren't the degenerates the Internet celebrity stalkers that frequent these sites are.  We think too much.  We discuss real, substantive on field issues, scenarios, statistics, etc.  We don't have time to give a crap about stuff like this, because PERSONAL LIVES ARE PERSONAL LIVES.  Most of the time, they have nothing to do with the actual entertainment we pay for that takes place on the field.

So turn off the Tiger coverage.  Don't pick up that tabloid with A-Rod on the cover.  And pass judgment on Lane Kiffin for what he does with the University of Southern California's football team, not on what he's alleged to have done off the field.

Today, it's those three.  But if we as sports fans allow sites like TMZ Sports, Bitten and Bound, etc., to be successful in our realm, tomorrow it'll be our favorite Penn State athletes doing keg stands on frat row like they always have.

That, my friends, is a scary thought.

So the next time you see a story like the Tiger scandal, or this hoax about Lane Kiffin, turn the blind eye.  You're better than that.