Share All sharing options for: Nitt Picks Remembers The Facts 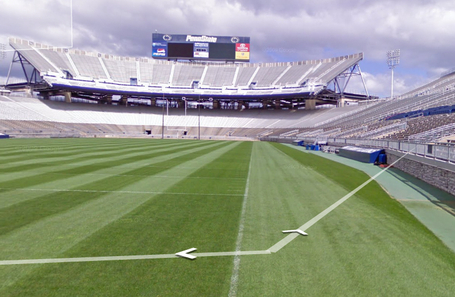 I'll say it. The 2005 season was magical.  Using the word "magical" is tired and lame and frankly kind of annoying -- but it's also appropriate.  The Dark Years can't really be described with the tools language provides. As exhilarating as the Indiana goalline stand was in 2004, remember what it was: a goalline stand against Indiana.  Backs were against the wall, and things didn't end in total embarrassment.

I'm straying; back to 2005.  Noncon play was encouraging, but our souls were way too torn to actually elevate hope.  The Northwestern game was not great football, but when you consider the four turnovers the team overcame, and the leadership we saw in Robinson, well it was a heck of a win.

And then, of course, there was Ohio State.  The atmosphere every game that will every be played will be measured up against.

All of this is a very long way of reminding you that "no," 2005 was not and could never have been a championship season.  The past has a way of blurring as we move forward.  This happened to Rittenberg when he called Penn State's 2005 team the second best of the Big Ten's decade:

If not for a Michigan touchdown on the final play at the Big House, Penn State could have been playing for a national title. The Nittany Lions still went on to an 11-1 finish and an Orange Bowl championship as Big Ten MVP Michael Robinson led the way at quarterback.

That Michigan loss was painful, trust me I was there, but you've got it all wrong, man.  Had Penn State won that game, held on and finished with a 12-0 season, you know what would have happened in January?  This:

Unfortunately for Paterno, 2005 was a season of a media-built legend that Penn State wasn't going to be able to touch.  Not in their dreams.  This was the preseason poll:

Do you really think a team that wasn't even ranked until week 5 was going to break that fortress?  I mean the #3 team didn't really even have a shot, and remember both USC and Texas won convincingly in their CCGS; the combined score in those two games was 136 to 22.  Yes, 136(!) to 22(!) the week before selection.

A perfect season would have been great, we have a tradition of winning them all and not garnering any respect, but there is no question that, even at 12-0, Penn State would have been another Auburn of the BCS era.

Yeah, but that would never happen to us, would it?  Well mathematically it can't, but, uh, this isn't exactly good news for the proud Bowden family, is it?

Since Fisher's ascent to Florida State's head coaching position became imminent [aka Bowden's exit became obvious] in early December, the Seminoles have rallied from the middle of the pack to become one of the hottest programs in the country.

So not only was Bowden not coaching, making in-game decisions or even paying attention to what team he was playing, but maybe he was also pushing away recruits?  The Florida State recruiting class has gone from decent but mediocre to top 16 in every service since Bowden's exit.

So let's kick out Joe and bump ourselves up a bit, right?  Maybe not: Penn State's current class, even at a very small 18, is top ten at most services.

So maybe Bowden was just a drain.  Maybe he lost the allure that Joe still brings.

Or maybe the media is making something out of nothing and this:

"I think people see the energy and the leadership provided by Coach Fisher," FSU recruiting coordinator James Coley said. "He's a big-time coach, and this is a big-time program."

Or it might just be good luck explained away as good work.  Florida State's last six classes (from newest to oldest) were ranked 7, 9, 23, 3, 2, 3 suggesting that, well maybe some kids were just waiting this year for no specific reason, and maybe this top 10 class was on the way anyhow.

You look better when everything crumbles around you. DocSat did a review of the curious Pitt Panthers.  A team that finished the season ranked 15th, but also (1) didn't beat a single ranked team all season and (2) lost to NCST, who failed to qualify for a bowl game.  I guess it was that kind of year.

So while it's debatable whether Pitt is "back," it's likely they aren't going anywhere:

With Brian Kelly's departure from Cincinnati and Jim Leavitt's abrupt exit at South Florida, incredibly, Dave Wannstedt -- the same mustachioed mediocrity in the critics' crosshairs going into 2008 after failing to get the team over .500 in any of his first three seasons -- now stands as possibly the most stable coach in the Big East.

This is, well, kind of sad.

At the very least, the Panthers answered any doubts about their staying power at the top of the conference...

At the very least, indeed.  Just a review about Pitt's "staying power":

I guess "staying power" is a relative term. As in "they've had relatively no staying power at all in any of their player's lifetimes."

In scores of other games.  A Cleveland writer wants UConn in the Big Ten?...thinning transfers at Iowa...Jon Sandusky becomes the Brown's director of player personnel, where he'll hope to one-up Matt Millen.