Penn State Men's Volleyball entered the season with high hopes, and have thus far not disappointed too much. Currently sitting at 4-1, the only loss coming at the hands of #1 USC, the team is poised to make another sweeping run through conference play. Since the Outrigger Tournament, which ended two weeks ago, the Lions have only played two matches, both in conference. However, with 3 matches in the next 5 days, things are heating up.

Ten days ago, the Lions opened conference play against St. Francis with a 3-0 (-22, -20, -20) win. Hitting at .398, the Lions started the year strong, with soon to be household names Will Price, Joe Sunder, Edgardo Goas, Dennis Del Valle, and Max Lipsitz all doing their part. The following Monday, Price was named the EIVA Player of the Week, an honor that will surely be repeated by other Lions this year.

On Saturday, the Lions traveled to Springfield for the first road match of the conference schedule. After a shaky first set, the Lions eventually pulled away with a 3-0 (33-31, -22, -26) victory. All world setter Goas had 38 assists and libero Del Valle tied his career high with 18 digs. You will hear these names again all year long.

Tomorrow, the Lions stay at home to play Juniata. The match starts at 7 and will be streamed live at BigTenNetwork.com. On Friday, the Lions will travel to Illinois for two matches. First up is Lewis, followed by Loyola-Chicago on Saturday. This mini-road trips is followed up with six consecutive home matches beginning the next week, February 5.

And just in case you were wondering what our chances are with the upcoming matches, GoPSUSports has you covered:

Because it's my story, and I'll do what I want with it, this is going to happen (the BSDivas will just have to deal): 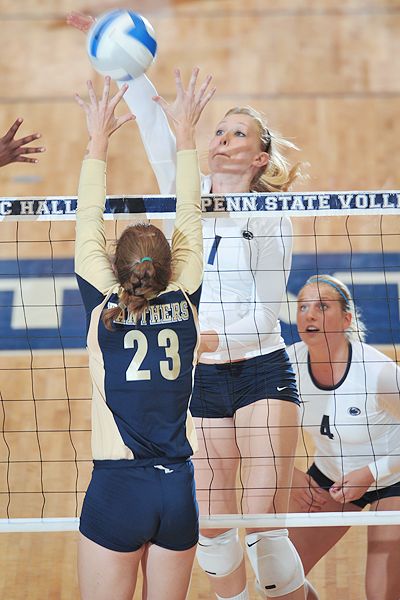