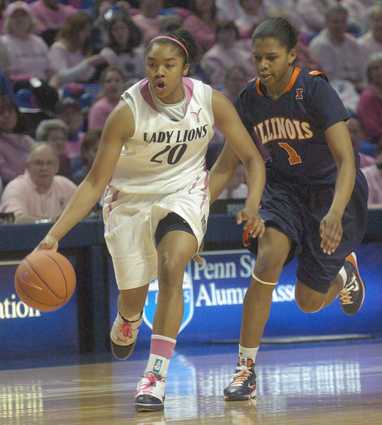 The Lady Lions jumped into the rankings at No. 23 on Monday, a day after beating Illinois 70-66 on Sunday afternoon at the Bryce Jordan Center.  The team is now 15-4 and 7-2 in Big Ten play, still alone in second behind Ohio State.

Freshman Alex Bentley led the Penn State with 19 points, and Tyra Grant, double teamed much of the game, posted a 15 point, nine assist line.  It was good to see Tyra find ways to help the team without scoring, as she's sure to draw more double teams the rest of the way.  It was also encouraging to see Bentley, and fellow freshman Nikki Green (nine points/11 rebounds) pick up the scoring load.

The Lady Lions also got some good efforts from off the bench.  Janessa Wolff ourscored her foul total for the second consecutive game(!!!) with seven points and two rebounds and Marisa Wolfe chipped in six.

Next up for Penn State is 9-10 (4-4) Purdue Thursday at the Jordan Center before a trip to 11-8 (3-6) Michigan Sunday afternoon.  The Michigan game will be on the Big Ten Network, so tune in and check this team out.  You won't be disappointed.