Truly, no Penn State recruiting class is complete without at least one way below the radar recruit, and he has finally arrived.  Meet Brad Bars.  He's a 6'4", 225 pound OLB/DE prospect from Nashville, Tennessee, and kind of has an evil Billy Zabka look about him: 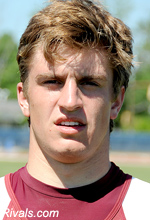 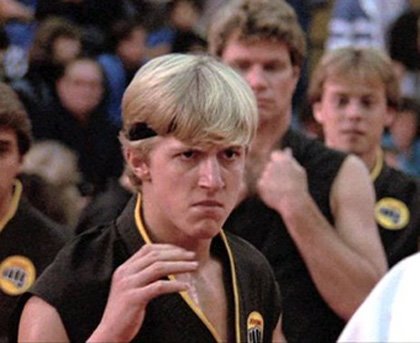 Or maybe I just want a Penn State player who looks like Billy Zabka.  Whatever.  As for his other offers, well... 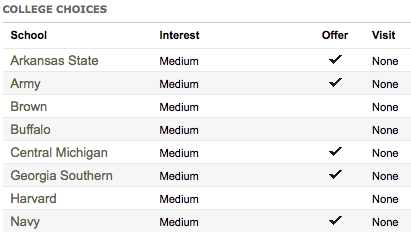 But whatever, suck it, Georgia Southern!

As for actual, non-potshot information, it's scarce with the exception of long-time recruiting guru Max Emfinger:

Now the amazing part of this story is that Bars (6-4, 225, 4.5) is a super, athletic player who can run a legit 4.5; do a 36 inch vertical jump; and a 4.3 in the pro-agility shuttle; but not one single team that he went to their camp offered him a scholarship. Now, I'm going to give you my opinion why!

Secondly, since Bars was not on that recruiting board, coaches are not even evaluating players that come to their camp if they are not on their recruiting board. This sounds pretty amazing to the parent or the player that makes a spectacular catch or makes a spectacular move to get past a blocker and make a tackle. These plays are non measured plays that do not have a time or distance credited to it.

In each camp that Bars went to, he was outstanding and in fact at a couple of them, he just bearly missed getting an  MVP Award. No team offered, but the reason was not that he did not deserve an offer, but no school wanted to be the first BCS school to extend an offer.

His dad, Joe Bars, played for Notre Dame and his uncle also played for The Irish. His grandfather player for Michigan State.

So he's got the bloodlines and isn't short on athleticism.  We'll file this name away for a few years and see where he's at in 2012.  Congratulations and welcome, Brad.