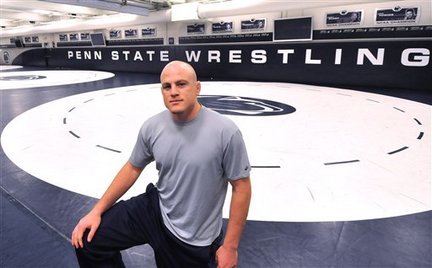 Well, after what Cael described as a lackluster effort last weekend, he seemed a lot more upbeat in his weekly radio show. Hopefully it's a sign that good things are ahead for the team in the coming weeks. If those good things are ahead, they'll have to wait until after Friday's showdown with the Hawkeyes, in what's likely to be a behind the woodshed beating. On the bright side, this has a slight chance to be better than last years match at Rec Hall where Penn State picked up just one win.

Sunday, they travel to Wisconsin in a very winnable match, and there should be some great individual bouts in that dual.

125: #12 Brad Pataky vs #4 Matt McDonough
For some reason, I have a feeling Brad will be able to jump out to a lead in this bout. I think he may even hit a big move early and get McDonough in trouble. But unless he pins him, which is unlikely, I don't think he's able to hold on and go the distance. I can't see Pataky winning this match and I can see McDonough possibly getting a major here if things get really ugly.
McDonough by dec

133 Bryan Pearsall vs #6 Daniel Dennis
This is a terrible mismatch, as is Pearsall against most Big Ten wrestlers. Easy win for Dennis and definite bonus points. The hope for Penn State is that Pearsall stays off his back and limits the damage.
Dennis by maj dec

141 Adam Lynch vs #5 Montell Marion
Marion has really come on strong this year -- he and McDonough are also currently the only ranked Iowa wrestlers that will be returning next year. He'll have no problem with Lynch.  Much like at 33, this is all about putting up a good fight and limiting the damage. Lynch needs to show more fight than he did against Humphrey a week ago. I'm not sure how much of pinner Marion is but I wouldn't be surprised to see a pin here.
Marion by maj dec

149 #5 Frank Molinaro vs #1 Brent Metcalf
I'm not really sure there is much to say about this match, Frank seemed pretty pumped about wrestling the top two guys in the weight this week, we'll see how he feels about that on Sunday afternoon. I think this will be a better matchup for Frank than Palmer was. Obviously Metcalf is better, but he'll be coming forward the whole match instead of moving backward which will make it slightly easier to set up takedowns. And even Bubba never had much trouble scoring on Metcalf -- it's a matter of finishing what you started. For some reason, I'm having terrible flashbacks to the last time Penn State went to Iowa and Bubba got out to a huge lead before completely falling apart. I don't think Frank does that here. I think he'll put up a good fight and might even surprise some people with a closer match than many expect.
Metcalf by dec

157 #5 Cyler Sanderson vs Aaron Janssen
This is the one hole in the lineup for Iowa and the only match where Penn State will be heavily favored. Hopefully Sanderson can go out and put a good match together to give Penn State fans something to cheer about.
Sanderson by maj dec

165 #8 Dan Vallimont vs #5 Ryan Morningstar
This is the start of a big weekend for Dan and I'm really looking forward to this bout. Morningstar took both matches last year against Dan but there is still a bitter taste in my mouth from the match at the Big Ten Tournament. Dan truthfully out wrestled Morningstar in that bout, but came out on the wrong end of the score. Even with his struggles at times, Dan has looked much better this year than he ever did last year. I think Dan takes this one in a tight bout.
Vallimont by dec

174 Justin Ortega vs #2 Jay Borschel
Borschel provided one of the few highlights of the Big Ten tournament for Penn State last year when Quentin Wright beat him in the semifinals. He'll get to exact some revenge and then some this year. It looks like he's finally put it all together in his senior year, and he'll blow through Ortega.
Borschel by tech fall

184 #13 Dave Erwin vs #7 Phil Keddy
This should be a pretty good match.  It'd be nice if Penn State could steal one here to come out with three wins. But I think Keddy at home might just be too much for Erwin at this point. I think Erwin's best chance is to keep it close early but at the same time, there's no way he's going to get a fair shake from the ref in Carver Hawkeye Arena so that will also work against him. Erwin has been close now on several occasions so it would be great to see him finally get a win against a top ten guy.
Keddy by dec

197 Steadman/Crowell vs Luke Lofthouse
This is currently another weak spot for Iowa while Beatty is on the shelf. Although Penn State would gladly take Lofthouse over what we are currently throwing out there. Cael was extremely non committal during his radio show on who the starter would be, and basically skirted the question by saying they're both good and they work hard. I get the feeling at times though that Cael sees Crowell as having the better upside but that's just reading between the lines a little bit. Either way Penn State's struggles will continue at this weight.
Lofthouse by dec

Hwt #11 Cameron Wade vs #9 Dan Erekson
Erekson has finally returned to the lineup for Iowa, if Wade was ever going to beat him it would seem now would be the time, as he's likely not 100% yet. But even if he's not a 100%, I think Erekson is just the much better wrestler at this point.
Erekson by dec

It won't be quite as bad as last year but it will still be tough to watch.  Hey, it's only 2.99 on the Big Ten Network's website. In all honesty, this will be a good match for Penn State to use as a measuring stick to see where they are and where they need to go in the next couple of months. For the fans, this will be a good match to watch and enjoy the end of the Iowa dynasty. They have plenty of depth but there is no way they are replacing the talent level that they lose this year. And it could be a look at what Penn State's lineup will be like in a few years if everything goes according to plan.

125 #12 Brad Pataky vs Drew Hammen
Hammen is one of the weaker 125 lbers in the Big Ten.  Pataky should win and win big in this one. He needs to pick up bonus points to get Penn State off to a good start in what should be a tight bout.
Pataky by maj dec

133 Bryan Pearsall vs #8 Tyler Graff
Another tough bout for Pearsall, he needs to limit bonus points to keep Penn State in the dual meet. Penn State can't afford to give up 10 points here and 141 like they did against Oklahoma and Oklahoma St.
Graff by maj dec

141 Adam Lynch vs #20 Cole Schmitt
This is a match I'm really interested in, Lynch has wrestled really tough at times and has shown his inexperience at other times. I think he could steal one here for Penn State, and an upset at this weight would really strengthen Penn State's chances of winning. But I have to go with the slightly better more experienced wrestler at home.
Schmitt by dec

149 #5 Frank Molinaro vs #2 Kyle Ruschell
It's the second tough test in a row for Molinaro in what will be a very telling weekend for his potential at nationals. I think this is probably a worse match up for him then Metcalf although Metcalf is far better. I'm not ruling out Frank stealing one here, but I just don't see it.
Ruschell by dec

157 #5 Cyler Sanderson vs Greg Burke
Another easy win for Cyler the only question here is how many bonus points he can pick up for Penn State -- they'll definitely need them. Burke is definitely near the bottom of the Big Ten ranks with his 4-13 record.   Expect a big win for Cyler.
Sanderson by tech fall

165 #8 Dan Vallimont vs #1 Andrew Howe
This is a huge match for Dan, and I personally think a good match up for him. The two things that seem to give Dan problems (aside from anyone who actually tries to ride him) are constant pressure and quickness, Howe doesn't have either. He's definitely good but he's defense first and slow and strong. I think if Dan can use his quickness to get angles he can take Howe down, he won't be able to come in straight on because that will play into Howe's main strength. When he does shoot, he needs to finish quickly -- he doesn't want to get caught underneath Howe where he'll be at a huge disadvantage. I also think no matter what the score or the situation, Dan needs to take neutral when he gets the choice. I think he has a slight advantage when they're on the feet but I think he'll likely get ridden the entire period if he picks down. I've been going back and forth with this one but I think Dan will be coming off a tough match on Friday and Howe will be fresh with a home gym advantage and that will be the difference.
Howe by dec

174 Justin Ortega vs Jimmy Duffy
This is actually a winnable match for Ortega.  Duffy brings in a record of just 3 - 13. Sadly with all the good matchups in this dual, this could be the match that decides the outcome. I think a healthy Ortega from the beginning of the year would have won easily.  The way he's been wrestling lately, I'm just not so sure. It's likely to be a close bout and that fits Ortega's style a little better.
Ortega by dec

184 #13 David Erwin vs #16 Travis Rutt
This is a huge match for Erwin for seeding at the Big Ten and for some confidence. The way he's been wrestling lately, I honestly think he's become more of a top ten guy. I think he wins this bout comfortably.
Erwin by dec

197 Crowell/Steadman vs #8 Trevor Brandvold
Again no clue who wrestles for Penn State here likely will be the opposite of who ever wrestles on Friday, either way again I don't think it will matter. I think Brandvold beats either guy easily and probably picks up bonus in the process. Brandvold could get a fall here, but our 97lbers have done fairly well of fighting tough to not give up many points.
Brandvold by maj dec

Hwt #11 Cameron Wade vs Eric Buegenhagen
Wade will be heavily favored in this bout and I think he'll win fairly easily. Probably won't be high scoring since heavyweight bouts rarely are but it should would be nice to see Wade go out and hammer some one for once and pick up a major at least.
Wade by dec

Obviously, it's going to be a tight match where bonus points and whoever picks up the swing bouts will win it. These teams are fairly evenly-matched, strength against strength and weakness against weakness. But Penn State definitely needs to take advantage of the weights where they do have a huge advantage, namely 125 and heavyweight. In the end, hopefully it will be a good quality road win for Penn State to close out what will be a challenging weekend.