It was a heck of a run.  Pre-bowl game thoughts from the comments at ATVS:

His 4-0 Record at LSU, along with a 157-44 scoring advantage in those games, makes him a legend IMO.

And so it's sad that, after Bobby Bowden The Other Bowl Legend retired to much fanfare and things like this:

...Leslie Edwin "Les" Miles ended his career as a Bowl Legend with nothing more than some poor clock management, a lot of mud, and a two point loss to some guy name Joe Paterno.

So let's take a good look back at the humble beginning, long established glory, and substance of what made this man such a Master of the Money-Grab Game, a true Patron of the Postseason, such a Gutsy Scuffler of the Glorified Scrimmage.

It all started with The Beginnings. 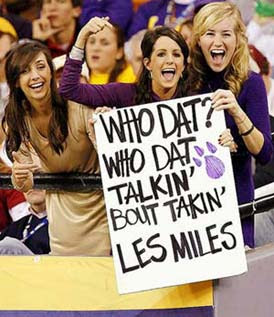 Les rode a fake two game bowl losing streak at his practice school, Oklahoma State, and stormed into the Chick-fil-A Peach Bowl actually undefeated, destroying my favorite of the many not-quite-up-to-the-hype Miami teams of the Larry Coker era.  (Probably my favorite because they played just one team all season with less than four losses and were sitting in the top 10.)
Shellacking ensued.  No one knew it at the time because Les was actually just 2-2 as a head football coach in bowl games, but a Legend was born that day.  Or maybe no one noticed because of all the other post-game commotion:

Miami waited until after the Chick-fil-A Peach Bowl to put up a fight.

Miami and LSU players exchanged punches in the tunnel as they left the field Friday night after the Tigers' 40-3 victory. 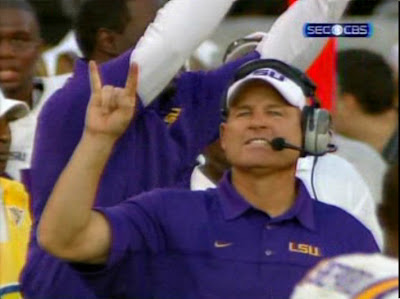 No worthwhile legend is made without first beating a worthwhile and completely deserving opponent who doesn't get into games because of a schedule filled with service academies and name brand.  Les found that worthwhile and completely deserving team in the Brady Quinn-led 2006 Notre Dame Fighting Irish.
Some might call the other team going for it on their own 34 on the first drive of the game a gift, especially when the three yards needed weren't gained because of an incomplete pass.  I would agree with those 'some' people, because it was a fairly insane call that led to a 7-0 LSU lead two plays later.
But Les proved his worth against the mighty Irish by not only matching but actually beating the nine point spread that fell in his favor.  Fuzzy math said Les was now an undefeated bowl coach, and trust me, you can always trust fuzzy math.
The Actual Stuff to Brag About. You know what that is?  The sweet taste of inevitability.  Just 12 short months after Florida ran all over Ohio State in the BCS MNC, Les drove the one hour and 18 minutes down to the Louisiana Superdome for a neutral site game against the Buckeyes and did just about the same thing.

An MNC ensued, and for the second straight year Les beat a team he was favored against.

The Calm Before The Storm.

Embarrassing blowouts by Florida, Georgia and Mississippi mean one thing in the SEC, and that one thing is another December trip to the bowl game named after a fruit but sponsored by a restaurant that awkwardly doesn't serve anything actually grown in the ground.

Georgia Tech may have been a feel good story, but there 1920s offense was not match for an actual defensive front the Bees hadn't seen all season in the ACC.  Four-n-oh, and the mathematicians can suck it.

The Fall of Rome.

Nothing good ever lasts for long:

It sure did.  And with a two point loss to a team not known for toughness or bowl wins, it must have been especially hard to swallow.

The loss ended an era, and college football fans across the country are forced to scour the nation for an active coach who might one day be able to carry the weight of "Bowl Legend" for an entire four seasons without buckling their knees via a 4-yard crossing route called with 20 second left to go and a legacy on the line.