Share All sharing options for: Icers Open the 2010-11 Season

After a month of speculation and celebration over the announcement of Varsity ice hockey at Penn State, it was finally time to actually put the sticks on the ice and start playing the good old hockey game.

Before we get into the weekend results, let me recap some of the off-season changes that are worth note. Over the summer, the Icers replaced former assistant coach Bill Downey with Texas A&M (ACHA D2) assistant coach, Josh Hand. As for the new players, there are five new players who will be donning the Blue and White this season. These new Icers include Freshman forwards Andrew Duval and Mike McDonagh, Freshman defenseman Ryan Seibolt, Freshman goaltender Mathew Madrazo, and Junior defenseman Kevin Miller (a transfer from Robert Morris' ACHA team).

The other off-season change of note is to the ESCHL, as Navy and Drexel both ran to the ECHA (which houses the Penn State - Berks team) and Robert Morris (PA) joined the ESCHL. That gets us to five teams in the ESCHL for this season: Penn State, Rhode Island, West Chester, Delaware, and Robert Morris. Now, onto the games!

Like the start of most seasons, the Icers needed to shake some of the rust while trying to get accustomed to the new lines and new players. Outside of a couple defensive breakdowns, the Icers controlled much of the first period. A goal from George Saad gave the Icers the 1-0 lead after the 1st period of play. Keeping up where they left off last season, the Icers let Pitt hang around, as Senior goalie Teddy Hume would allow a Pitt goal three minutes into the 2nd period. But Carey Bell would counter just minutes later, giving the Icers a 2-1 lead. That score would stay the same until Chris Pronchik would put home his first of the season just 12 seconds into the 3rd period. Rich O'Brien and Pronchik would add power play goals later in the period to complete a 5-1 win for the Icers.

After coasting to an easy 5-1 victory on Friday, the Icers looked to keep the momentum going into Saturday. And freshman Mike McDonagh would help do so, putting home his first goal as an Icer early in the 1st. Halfway through the period, the Icers would successfully kill a 2-man disadvantage, only to have the Panthers score one second after the 2nd penalty expired. Midway through the 2nd period, Chris Cerutti would crash the net and score, giving the Icers a 2-1 lead. But sloppy play and missed opportunities by the Icers dominated much of the 2nd period, allowing Pitt to tie the game up again. The sloppy play would continue into the 3rd, up until George Saad would get his second goal of the season on a 3-on-2 rush. Shortly after that, Rich O'Brien would keep pace with Saad, scoring his second in as many nights and giving the Icers a 4-2 lead. The two teams would swap powerplay goals (with senior captain Marek Polidor getting his first goal of the season), and Pitt would close it back to a one-goal game late in the period. But the Icers would do enough to hang on, sweeping the opening weekend of games.

If there's anything the webcast from this game showed me, it's that the yellow hue that fills the Ice Pavilion will be a thing of the past with the new ice arena. Speaking of the new ice arena, the Pagula's were in attendance for the Icers' home opener. To honor their attendance, the Icers would light the lamp and light it often. The domination would start early, as George Saad would score his 3rd goal in as many games, giving the Icers the 1-0 lead. A few minutes later, Tim O'Brien would finally get his first goal of the season, and then follow that up with his second goal just 26 seconds later. The first period would see two more goals, with Chris Pronchik would put home a short-handed goal (thanks to the hard work of Marek Polidor), and Joe Zitarelli would make it 5-0 not long after.  The Icers would continue to roll in the second period (Cerutti, Polidor, Dan Petrick's first goal as an Icer, Collins), allowing coach Balboni to switch his goaltenders, giving back-up goalie Dan Ivanir some playing time halfway through the game. 3rd period saw a couple more goals (Saad's 2nd and Pronchik's 2nd SHG), capping a laughable 11-0 Icers victory.

News and Notes: First, I want to remind everyone that the games are now being broadcast live on UStream. Thanks to some donations and the continued support from the Booster Club, the Icers have made the move from radio to live-streaming video for their games, and all for free for the viewers. The other nice thing about this is that those in charge of the video are able to condense it into the highlight videos at the bottom of the box scores. It's a great addition to the Icers resources available (especially for someone far removed from State College).

Next, the Icers played 3 completely different games, so I really have no idea what to expect from this team at this point. They struggled at times against the opening games against Pitt, but that could just have been the rust and getting used to playing with each other at full speed. Drexel is a poor team and played without their starting goaltender, and the Icers took full advantage. From the looks of everything, this is going to be a very potent offense, especially with George Saad adding to the fire-power. The defense looks a bit shaky, but the addition of Kevin Miller should start to solidify things.

But the challenges start rolling in this coming weekend, as the Icers welcome the Central Oklahoma Bronchos - the team that knocked the Icers out of the National Tournament in the 2nd round last season. You can be sure that the Icers will be amped to get some revenge on home ice. After that, the Icers host the rival Ohio Bobcats for a weekend set. The next few weekends could easily set the tone for the rest of the season for the Icers.

Some Love for the Ladies: The Lady Icers are just as excited and focused as the men's team this year. Along with the news of their jump to the NCAA, the Lady Icers are coming off of one of their most successful seasons ever. With the bulk of the team returning, the ladies opened their season against West Chester and proceeded to make short work of the under-staffed Rams, 4-0. After a couple weeks off, the Lady Icers would welcome the defending champion Lindenwood Lady Lions to Penn State for a set of three games. Although the team played tough all three games, the ladies were swept by the 3-time defending champs (2-0, 6-1, 2-1). The Lady Icers will look to rebound on the road against Buffalo this weekend.

And yes, the Lady Icers have a new team photo. 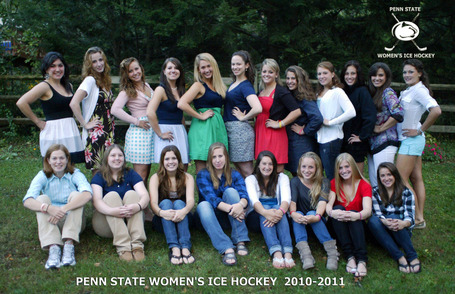