Icers Recap: It Gets a Little Tougher

Share All sharing options for: Icers Recap: It Gets a Little Tougher

While the football team was off and not losing to anyone getting healthy, it was revenge weekend for the Icers, as the Central Oklahoma Bronchos (yes, it's with the 'h' and no, I don't know why) came to town. For those who don't remember, the Bronchos were the surprise team that knocked the Icers out of the National Tournament last season. Both teams were undoubtedly energized for this game, and perhaps the extra energy rush was why both teams had some sloppy play throughout the game.

The Icers would take the lead first, as Tim O'Brien would get a short-handed goal halfway through the period. A few minutes later, the Bronchos would answer, and the teams would take that 1-1 tie into the intermission. The back and forth would continue into the 2nd period, as Dominic Morrone would score early for the Icers, but was countered by a UCO powerplay goal a minute later. The sloppy play would continue and the score stayed at 2-2 until Eric Steinour would slip a bad-angle shot past the UCO goalie late in the period, giving the Icers the 3-2 lead heading into the 3rd period. The Icers would control much of the 3rd period, but the continued sloppy play kept the Icers from extending their lead throughout the period. As such, history would repeat itself, and the Bronchos would score late in the 3rd period to tie the game, sending the game into overtime. In the OT period, the Icers would get the best of the offensive opportunities. With his 3-game goal-scoring streak on the line, George Saad would pick up the loose puck from the corner of the offensive zone, make a great individual effort, and pick up his 5th goal of the season, giving the Icers the 4-3 win. 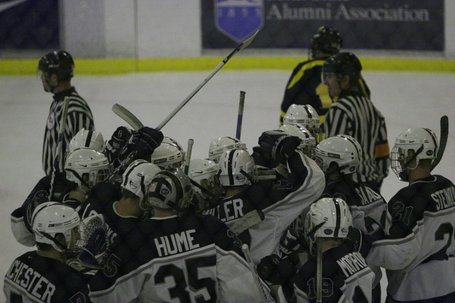 Thanks again to Mike Ivanir for his great pictures

With the win/loss yesterday, the Bronchos moved to 3-7-0 on the season - a long fall from their semifinals run from last season. A win over Penn State would give UCO their first win over a quality opponent and a push in the right direction. After an over-energized, sloppy game on Friday, the Icers played a much more controlled game on Saturday. Controlling the offensive play for much of the period, Chris Cerutti would give the Icers the lead halfway through the period. After a series of penalties, Paul Daley would deflect a Kevin Miller shot on the powerplay to give the Icers a 2-0 lead. Cerutti would add another PPG less than a minute later to extend the lead to 3. The second period was back and forth, with the Bronchos getting the only goal to cut the lead to 3-1. The energy remained in the third period, but the Icers kept the Bronchos from getting any closer, completing the sweep with a 3-1 win.

If a weekend of revenge wasn't enough, this past weekend was the ever-emotional rivalry weekend against the Ohio Bobcats. The two teams played each other like old rivals do - a little bit of feeling out early in the game, and then letting the chippy play take control. Ohio controlled most of the first period, thanks to three Icer penalties. With the energy on their side, Ohio would score halfway through the 1st period, taking the 1-0 lead. From there, the game would get more physical and the officials would let them play. While the 2nd period was quiet on the scoreboard, the third period would see the Icers finally take it to the Bobcats. Dan Loucks would take advantage of an Ohio penalty to tie the game up at 1-1. Taylor Cera would give the Icers the lead three minutes later, and Dominic Morrone would put home an empty net goal, sending the energized Penn State crowd home happy.

Where the Friday refs let the teams play chippy and physical, Saturday saw the whistles being blown often. The Icers would take advantage of one of these penalties, as Marek Polidor would give the Icers the 1-0 lead midway through the first period. But that was basically the start of the end for the Icers, as the Bobcats would score 5 straight goals - 2 within a minute in the 1st period, and then 3 in the first 5 minutes of the 2nd period. That would end Teddy Hume's day in net, giving backup John Jay some playing time this season. The Icers would cut into the lead - Morrone would score on the Power Play late in the 2nd period, and Tim O'Brien would close the gap to 5-3 early in the 3rd. But another Ohio Power Play goal, combined with Tim O'Brien's 10-minute misconduct, put an end to any big comeback hope for the Icers. Ohio would win the game, 6-3, splitting the weekend and handing the Icers their first loss of the season.

News and Notes: I have no idea why the Icers dropped from 4 to 5 without losing a game (the rankings were released prior to Ohio weekend). It's still early in the season, but it's one of the reasons I cannot wait to get out of the ACHA. The Icers next two weekends are against good teams who are severely under-performing this season. Next up is Liberty is currently #15, but has struggled against quality opponents this season. After that, the Icers have a home and home with ESCHL opponent West Chester. The Golden Rams have lost to teams like Indiana, Western Michigan, and Rutgers this season.

It looks as though the penalty kill has returned to an attacking style, which has resulted in 3 SHGs in just 5 games this season. There are two things that make this possible - big, talented forwards (O'Brien, Morrone, Saad, and Steinour most notably) that can create scoring opportunities and back-check effectively; and solid, defensive defensemen to contain any counterattacks. While it may be harder to sustain the pressure against better teams, it will definitely open up more scoring chances and create large momentum shifts in close games.

Some Love for the Ladies: With the Lindenwood losses behind them, the Lady Icers were on the road facing off against the University of Buffalo Lady Ice Bulls (yes, I wanted to make sure that I got to type their entire name). These were the first ECWHL games of the season for the Lady Icers, and they would walk away with the two-game sweep, winning 3-1 and 4-1. The ladies continued their road trip this past weekend against another ECWHL foe, the University of Rhode Island. The two teams would split the weekend, with URI winning Friday night, 5-0, and the Lady Icers winning Saturday, 4-3. The Lady Icers have off until November 11th, when they head to Cal of PA for a single game, then welcome conference foe UMass to University Park. Also, a quick nod to freshman Carly Syzszko, who currently leads the team in goals (3), assists (3), and points (6).