He's the darling of Scranton, PA and wears LaVar Arrington's number.  He has a beautiful red neckbeard and looks like he just had his way with a cheerleader.  Or your sister.   Last week he appeared in relief and led Penn State to a desperately-needed Big Ten road win. This week he gets the start.  In an 8pm home White Out.  Against Michigan.  He's the Captain of the Eff It, I'm Going Derp Club and he may have just downed a pint of whiskey.  He was number three on the depth chart, but number one in your hearts, he's sophomore former walk-on Maaaaaaaaxxx McGee  Maaaaaaatttt McGloin! 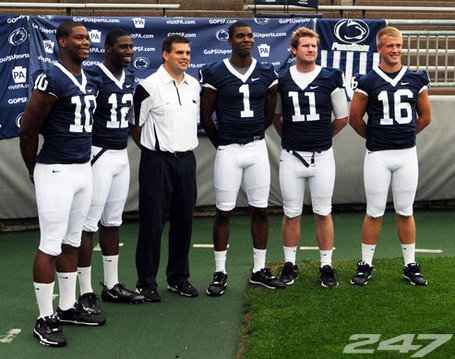 Since there has been more than a little speculation and re-characterization of Little Red's actions and performance last week, let's dive into the Video Room to review each ounce of his every swaggerific play.

1-10, at Psu24; drive start at 9:35, 1st quarter; Penn State 14, Minnesota 7.  Mac (we're going with JoePa's diminuitive here and abstaining from any junk mail references) enters for a woozy Robert Bolden on 2nd down and smartly hands off to Evan Royster for a 6 yard gain.  On 3rd down he shows us just what we might be in for, waving wildly to Derek Moye to (eff it and) go deep, and firing a near-interception into his general vicinity.  (better mute this one, I jacked the audio)

1-10, PSU39; drive start at 1:02, 2nd quarter; PSU 21-7.  We see a nice screen pass made nicer by Royster shedding tacklers. We see some more Babe Ruthian downfield waving and a throw in the dirt. We see Doug Klopacz doing his turnstyle impression, holding Royster to a two-yard run.  And then we see a four-receiver set and a long-overthrow. But not sure we see an audible. Do we?

2-6, PSU40; drive started at 14:51 of the 4th quarter; PSU 24-14.  Kevin Newsome actually started the drive, but after a timeout, McGloin took over.  First play is Silas Redd following the left side of the line, which got a surprisingly dominant push from all five players.  Second is Redd reading Johnny Troutman's block and making another nice gain.  Bummer he tripped over the back of Justin Brown.  Third is a nice screen completion to Michael Zordich, with plenty of Oline pass protection.  Fourth is a lovely flinch and penalty by Troutman.  Fifth sees Klopacz getting smoked, Barham getting bulldozed and Redd making a nice play to get back to the line of scrimmage.  Fifth we get to see Little Red attempt to block.  Result?  Huge whiff.  Sixth is paydirt with lovely touch.

Frankly, I ran out of steam.  But really, nothing to see here.  One two-yard completion to Shawney Kersey, an incompletion to Kersey and a 3andout on the first one ('Drive' 7).  And a couple handoffs to Redd before a missed field goal on the second one.

Obviously, the primary keys here are the touchdowns.  You know, those scoring devices alarmingly amiss against Alabama and Iowa.  They were the difference in the victory.  Tomorrow, two passing touchdowns won't cut it.  Six completions won't either.  Was this enough game film for McGloin to take in?  Was a week of practice with first-team snaps enough to bolster those numbers this week?  If it was, and Little Red leads this team to victory, big party at Millzners' house on Sunday.

McGloin Despite Them indeed.