Drink!  JoePa's presser transcript is (hicc)up.  Click here to read all his tasty words as he himself spake em.  But, remember fellow drinkers, the key to everything that follows is moderation.  Or not.  Get your game on after the jump.

Some reporter actually quoted Ron Zook as an entree into a Joe Paterno question.  Something about a 'must win.'  What do you think they got in return?

Obviously we're in a situation where we need to go out and play well. Winning is, yeah, certainly very, very high on our priorities. But I don't think it's a "must" game in the sense that we need to win it or else.  No, it's not that kind. I think we're still in the developing stage. I still think we've got a ways to go to be the kind of football team I think eventually we're going to become. And I would hope we would play better Saturday than we played (last week), and go from there. But I wouldn't put it in that category.

Apparently, Chris Colasanti & Bani Gbadyu have been banged up while continuing to practice and play.  Jordan Hill, Gerald Hodges and Curtis Drake are all working back from injuries.  Joe figures Hill may be back this week and Hodges and Drake may start getting more work in the next two weeks or so.

Addressing the 'slow starts' that many fans have been complaining about, Joe doesn't seem to have an answer yet:

So, I'm disappointed, as I'm sure the kids are themselves about that. But I think you've got to give the other guy some credit. We've got to, I think, if we're going to be a good football team, we've got to be ready to play on the opening kickoff. We've been just a little bit tentative. And I'm not sure why, to be very frank with you, I'm not sure why, because we've talked about it a great deal and we've tried to practice at a tempo so that when we started the ball game, everybody knew exactly what we were going to do, particularly after the Alabama game, when they took the football right down the field.

When asked about Kevin Haplea, Joe noted that 'he's got to' play.  He then went on with some decent drinkingspeak regarding his good work ethic, but he wasn't really digging a suggestive question about the possibility of playing Brett Brackett at tight end, indicating that Brackett is not big enough to perform the blocking duties.

Joe addressed another issue hot on the fingers of the early week BSD commentariat: use of Kevin Newsome on the goal line:

We probably could. And we've discussed it. Kevin's got to spend a little more time doing his homework. He's not quite right now he's gotten by with his athletic ability. And he's having a tough time with some other things, as far as what's expected of him in certain situations.  But I think that there is a place for him, and maybe we have to use him a little bit more, I don't know. You hate to do that with a young quarterback. You hate to take...you know, you don't get anything for nothing. We start putting Newsome in there and the other kid (Rob Bolden) starts looking over his shoulder. I don't know how that works. But it's something that we have talked about and I've decided we'll just play that by ear for a while.

And lastly, he addressed the commotion that ensued at the end of the first half.  He clearly wanted a timeout, tho he also said he was probably looking at only one play with either 6 or 3 seconds on the clock.  Also, we're not sure how it was ever disputed that McQueary also tried to call the timeout: 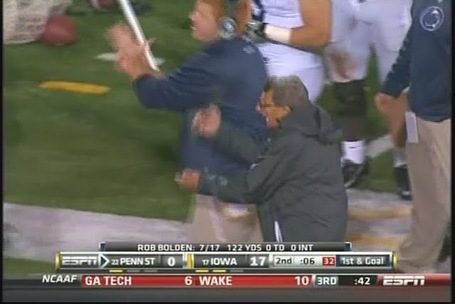 And JoePa had this to say about the refs:

In this video you can see the referee Joe is referring to running across the back of the end zone signaling to start the clock:

You can also see a slightly underthrown ball and a slightly unathletic reception, either of which if slightly improved would have made the whole charade moo.  Damn.