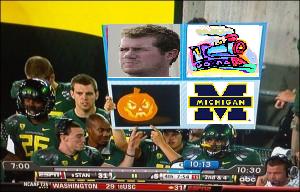 Chip Kelly knew what was going down before we did.

Well man, that was fun. As a basketball fan, I hear "The Fighting Talor Battles" a lot, but now I get to lay down the Fighting Denard Robinsons on Michigan, and it feels great. Unlike their seemlingly always anger filled coach, I can respect what Robinson did out there, and I almost feel bad for the guy busting his chops and getting no help at all. That being said he plays for Michigan so that feeling doesn't last long.

For me this game was what makes going to Penn State so cool. Matt McGloin at face value, had no buisness doing anything but handing it off. We knew he could do more than that, but walk-on backups aren't Peyton Manning for a reason. It would have been easy to see this game as a reason to wait until next year, injuries, youth,a tough schedule, but In the face of all of this Penn State fans haven't jumped ship. We have our trolls, our fair weather fans, but at our core Penn State fans are in there through thick and thin. Nights like this weekend are why you never jump off the wagon. Winning is never better when you know what losing feels like.

As always, no comments here.

Penn State-Michigan Review:Return Of The Mack

You Must Learn: Everything Was Beautiful And Nothing Hurt

PSU's McGloin should start vs. Wildcats

This was bound to happen. I think it would be unwise to think a well played game against a awful defense is a sign of some sort of success against better programs. I understand the argument you could have to start McGloin, but this seems more knee-jerk than anything else.

It's difficult to boil down Michigan's defensive woes to one statistic, but none is more telling than the inability to get off the field on third down.

And a few other things.

I'm 100% using Royster as the #1 back. I think Redd can learn from him. That being said I think Redd has that "it" factor LJ and KJC did.

The specter of a big number awaits Northwestern on Saturday in Happy Valley. "We have to go and play in front of 150,000 people," NU coach Pat Fitzgerald said after his team beat Indiana. "It will

Guess we have some building to do...really fast.

So does that mean we're getting a big swing somewhere?

Before you skip this link 2 things