Share All sharing options for: Nitt Picks Is Giving Blood 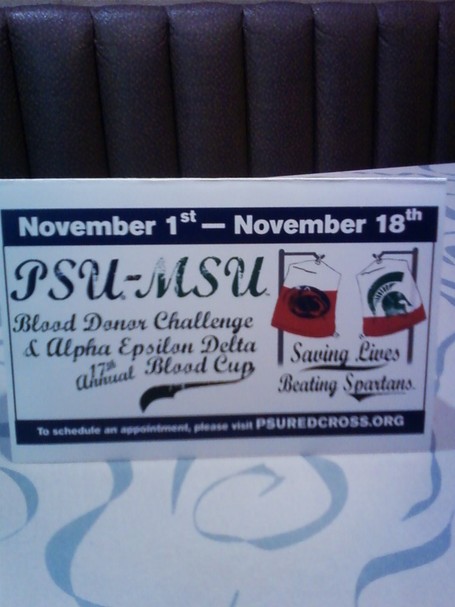 Good Evening folks. Before we get rolling, just wanted to give everyone a friendly reminder that the 2010 Penn State-Michigan State Blood Cup competition kicks off today and runs through November 18. If you're on campus through the next couple weeks and are able to give blood, hopefully you'll consider donating to the cause. Penn State has won the last four Blood Cups, and what better way to put a bow on the last annual meeting for the Land Grant Trophy than taking the Blood Cup home, too? Hopefully, this weekend's game with Northwestern will offer those of you off-campus a chance to participate this year if you wish, so keep it in mind as part of your weekend plans if you want to participate.

If you've got a Penn State shot glass at home, be careful, because you won't be able to buy another one.

Penn State will no longer allow its name or logos to be displayed on shot glasses in an attempt to address high-risk drinking — a move downtown officials support and some students are skeptical about.

"We felt that this was an appropriate step because of the message licensing such a product could send," Penn State spokesman Geoff Rushton said.

University logos include: the university seal, the Nittany Lion shrine, the mascot, the university identity mark, the Intercollegiate Athletics logo and Pride of the Lions designs, according to the Penn State licensing program’s website.

Well I hate to break it to the University, but as long as these puppies are legal, shots are child's play in the game of "high risk drinking" among students. Nevertheless, it's a good PR move for a school, I suppose. Penn State is probably never going to shake the "party school" label, but if you're going to make inroads with nervous parents out there, this is a good place to start. That said, it's a shame the few loons in this bunch always seem to ruin things for the vast majority of responsible folks. Shot glasses are cool, too, whether you're into the actual shots or not, and taking that away from fans kinda stinks.

He kicked a pair of field goals and five extra points and helped seal the Nittany Lions' 41-31 victory over Michigan Saturday night with a 7-yard run off a fake field goal on a fourth-and-4 play late in the fourth quarter.

Wagner was kind of a maligned fellow last year following his struggles from beyond 40 yards, but he's really stepped it up this season. He's 7/8 from that range this season and 20/23 overall. Anthony Fera's big leg on kickoffs gets a lot of attention, but Penn State's turnaround on special teams this season owes as much to Wagner's leg as anything else.

Also, in case you didn't click over, Saturday's game against Northwestern will be broadcast on ABC regional at 3:30.

In Scores Of Other Games