As the Icers' season rolls through mid-November, there have been a number of new things I have never previously experienced with this program. This season marks the first time that the goalie controversy has been caused by poor play from the starting senior goaltender. Historically, the Icers have had good goaltending. In fact, there is usually a rotation of the goalies because of the solid depth in net. However, this year, the goalies are either unknown and inexperienced, or they're just not playing up to their known ability.

And after this past weekend's games against Towson, I don't think I've ever seen this many blowout wins for the Icers this early in the season.

After getting 3 consecutive games off, Teddy Hume finally got another start against an always-tough Rhode Island team. Maybe it was a little rust from getting nearly 2 weeks off, or maybe his confidence has been broken from not being the main starter, but Teddy was just off against the Rams. While the Icers controlled the offensive opportunities in the game, it was the Rams who were actually finding the back of the net. Rhode Island would grab a 2-0 lead in the first period with two goals in 30 seconds. Even worse, those two goals were two of three official shots on net for the Rams - Teddy allowed more shots to get behind him than he kept in front. The Icers would struggle to score, Teddy would continue to struggle in net, and the Rams would roll to an easy 5-0 win. The last time the Icers were shutout was the 2009 ACHA semifinal game against Illinois (Icers lost that game 3-0). 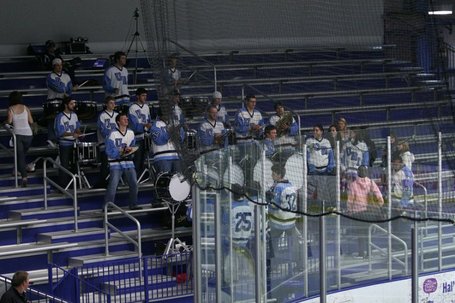 If the Icers lose, and only the URI drum section sees it, does it still count?

In the hopes of sparking the team, another goalie change was made. Coach Balboni gave the freshman Madrazo another start to try and split the weekend set. Both teams would get some chances, but a Penn State penalty gave the Rams the man-advantage, and URI would take advantage. A penalty-filled 2nd period killed any offensive pressure for the Icers, as the Rams would get the only goal of the period. Credit goes to both goaltenders, as they both made huge saves to keep the game at 2-0 after two periods of play. As the offensive futility continued into the 3rd, Marek Polidor would step up and finally break through halfway through the 3rd period, cutting the lead to 2-1. That goal tilted the energy back into Penn State's favor, as the Icers would start applying some serious offensive pressure. But the Icers would not be able to capitalize. The Rams would put home two late, empty net goal to take the weekend sweep with a 4-1 victory.

Like the Illinois football team in 2005, the Towson Tigers had absolutely no idea of the freight train of offense they were about to be obliterated by. While Madrazo's second start in as many games should have gotten the main focus, it somehow got lost amongst the 13 goals the Icers decided to put up. Sure, they were held goal-less for the first 10 minutes of the game, but that was the calm before the storm. With no real story to build up for this one, please enjoy this list of goal scorers: P. Daley (x3), T. O'Brien (x2), D. Morrone (x2), M. Longo (x2), M. Polidor, J. Zitarelli, C. Cerutti, N. Seravalli. And with that, the Icers returned to State College with the hopes of more of the same.

...and more of the same it would be. Hume would get the start in net, but he really wasn't needed for much. Which was good, because he looked very shaky throughout the game. To keep this short, your goal scorers:  D. Petrick (x3), T. O'Brien (x2), E. Steinour, D. Morrone, J. Zitarelli, K. Miller, P. Daley, C. Cerutti, B. Dolan. That's 25 goals in two games (all against the same, poor Towson goaltender) after the one goal they scored in the URI series.

News and Notes: First, kudos to Petrick for his hatty. He's a personal favorite of mine (mancrush? not yet...), and I love when the defensive defensemen get on the scoresheet.

Onto the more important points. The Friday night game against Rhode Island was ugly. And it did nothing to make me more confident in Teddy Hume as the starting goaltender. Admittedly, I've never been a big fan of Hume, and that game gave me all the more reason to jump aboard the Ivanir train. Still, it looks like the coaches are settling in on a rotation between Madrazo and Hume. I think Madrazo will be good, but I don't think he's the best option now - I'd still rank him last only because of his inexperience.

I have no idea what's going with the offense. It was completely shut down against a solid team in Rhode Island, and then exploded against Towson. The team can score, but it needs to prove it can take down the talented teams as well. They'll get their chance the first weekend of December, when #4 Delaware (14-0-1) comes to State College. It could be a big series in determining the tone for the rest of the season for the Icers. After Delaware weekend, the Niagara Purple Eagles make their annual trip to Penn State for a lone Friday game to wrap-up the fall semester.

Also, with this being Thanksgiving weekend, I wanted to give some thanks to the people who help me remain connected to the Icers through their blogs. First is the hockey blog from the Icers' play-by-play guy, Steve Penstone. He's been around the team for years and has some great insight and resources that I use regularly. The other is a new blog by Kyle Rossi - a former HMA member like myself, but before my time. In his short time of writing, he's done a lot of great work, and he helped keep me informed of the in-game action while my choppy internet connection kept me from watching some of the live streams this past weekend.

Some Love for the Ladies: On November 11th, the Lady Icers did something that the Pittsburgh Penguins struggled to do early this season - win at the CONSOL Energy Center. In a game at the Penguins' new home arena, the Lady Icers took down Cal University of PA, 5-1. Following the big win, the ladies returned to State College to take on UMass for a two-game set. With these being the final two ACHA games until January, the Lady Icers wanted to make sure they closed the fall semester on a good note. And there's no better way to do that than to sweep UMass, which the Lady Icers would do, winning both Friday and Saturday night (3-2 and 2-0, respectively). The Lady Icers are now 7-4-0 overall, and 4-1-0 in league-play. They have one final game this semester against Elmira College's NCAA JV team. After that, the Lady Icers have seven games in January (all at home), and six more in February, plus the ECWHL playoffs. Hopefully, the long layoff won't be a detriment to their playoff and ACHA tournament chances.