Icers Recap: All Aboard the Goaltending Carousel

Share All sharing options for: Icers Recap: All Aboard the Goaltending Carousel

Over the past couple of weeks, the football team has cycled through their QBs - sometimes due to injury, sometimes due to effectiveness or lack thereof. For the Icers, injuries haven't been an issue for the goalies, but that hasn't kept Coach Scott Balboni from giving all 4 goaltenders some ice time in the course of 3 games. It started in the Saturday game against Ohio, in which Teddy Hume started but was pulled for John Jay. As you'll see in the Liberty games, the other two goalies (Ivanir and Madrazo) would see ice time, meaning all four goalies saw some ice time in the course of 3 games. At least we're keeping them sharp, right?

If you were around for my Thursday night open thread (because the Icers game was much more exciting than whatever non-BCS game was on that night) (I'm being told that the ACC is still a BCS conference. Who knew?), you'll know that this was a game of 3 separate periods. The first period was back and forth, as each Icers goal (Pronchik and Steinour) was met by an equalizing Flames goal. Liberty would control much of the offensive pressure in the first period, and much of the 2nd, including the only goal to give the Flames a 3-2 lead after 2 periods. But the end of the 2nd period saw some more energy from the Icers, both offensively and physically, and that energy would carry into the 3rd. Tim O'Brien would open the period with two quick goals to give the Icers the 4-3 lead. Kurt Collins would follow with a pair of goals of his own, and Tim O'Brien would get his hat-trick goal, giving the Icers five unanswered goals and the 7-3 victory. Sophomore goaltender Dan Ivanir would earn the win after he replaced Teddy Hume following Liberty's 3rd goal. 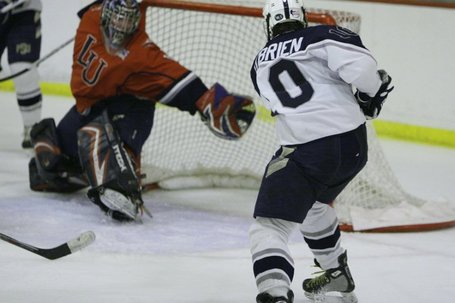 The goaltending carousel landed on freshman Mathew Madrazo for this game, and he and the Icers' defense would need to be sharp early. After some chippy play between the two teams, a Taylor Cera check would be called for a 5-minute major penalty. But the penalty killing would do its part perfectly, keeping the Flames off the board during their extended man-advantage. Just as the Icers were beginning to regain their offensive pressure, the Flames would counterattack and get on the board first. But a late 2-man advantage would give Icers the chances they needed, as O'Brien and Steinour would get power-play goals in the final minute of the period to take a 2-1 lead into the intermission. But the 2nd period started, which means the opponents score a goal, and Liberty continued the trend, tying the game at 2-2 early in the period. The score would remain the same into the third period, and if the 1st period was like a candy-induced sugar rush of energy for these two teams, the third period was the sluggish sugar low that follows eating 5 pounds of candy corn. The sloppy play would come back to bite the Icers, as the Flames would score a late goal, winning the game 3-2 and splitting the series.

Another game, another new starting goalie. This time, it was Dan Ivanir getting the start against a struggling West Chester team (3-7-0). Although the Rams were the team traveling to State College, it was the Icers that looked to have "bus legs" to start the game. A very lethargic and mistake-filled first period gave the Rams the opportunity to score first, taking a 1-0 lead into the first intermission. The game would turn into a game of cat-and-mouse from there. Chris Cerutti would get his 5th goal of the season early in the second period to tie the game at 1-1. The Rams would counter late in the period on the powerplay, but a WCU penalty shortly after that goal would give Dominic Morrone the opportunity on the powerplay to tie the game up again. Looking to steal momentum again, the Rams would score just a minute into the 3rd period to take the 3-2 lead. But Taylor Cera would counter 33 seconds later to steal back momentum and once again tie the game. That's when Chris Cerutti took over, scoring the go-ahead goal two minutes later, and then an insurance goal later in the period to secure the Icers' 5-3 win.

After Friday's game, both teams traveled to West Chester for a Saturday evening tilt. And if there was any fear of more "bus legs" from the Icers, those fears were allayed early, as Tim O'Brien would score 48 seconds into the game to give the Icers the very early 1-0 lead. The Icers would keep up the pressure, as defenseman Kevin Miller would get his first goal as an Icer, Timmy would get his 2nd of the night, Dominic Morrone would score following up on a Longo breakaway, and a Taylor Cera goal would make it 5-0 in the first. (Goalie Matt Madrazo got his first point as an Icer, getting an assist on Morrone's goal.) Some sloppy play by the Icers late in the period allowed West Chester to score twice, making it a 5-2 game after the first period.

The Icers would pick up the energy again to start the 2nd, as Morrone, Pronchik, and Cerutti (x2) would get the lead to 7 goals. Tempers started to pick up for a little bit, as West Chester started to take some runs at Madrazo, but penalties were handed out and the cheap play slowed down. In an otherwise quiet 3rd period, Mike McDonagh would get it 10 goals for the Icers, and West Chester would add a for-who-for-what goal late in the period, making the final score 10-3 for the good guys.

News and Notes: The Icers dropped to #8 in the polls, which is the lowest rankings I have ever seen since I started following the Icers 7 years ago. Some of it, I can understand - there are a number of teams with 2 or fewer losses (either regulation or shootout losses), so the Icers would be shuffled around with that. However, the fact that #4 Oklahoma with 5 total losses (4 regulation, 1 SOL) and #6 Ohio (3 regulation, 1 SOL) are still ahead of Penn State reminds me that 2012-13 can't come soon enough.

Looking ahead at the schedule, the Icers continue ESCHL play next weekend as they travel to Kingston, RI for a match-up against the #11 URI Rams. After that, the Icers face Towson with another home-and-home weekend for the last games of November. December sees three home games for the Icers - two against #7 Delaware and final Fall semester game against Niagara.

This goalie carousel is going to have to come to an end and soon. While it is wonderfully relaxing and inspiring to know that the Icers have great depth at the goalie position, giving one of these goaltenders consistent ice time will be necessary come tournament time. (Unless, of course, the coaches are attempting to win each of the four rounds of the tournament with a different goalie.) However, the more immediate issue for the Icers isn't the guy in net, but the guys clearing the ice in front of him. The defense has been very shaky at times, and that has been the reason for the greater majority of the goals allowed by the Icers thus far. If the Icers want to make a serious run at another championship, they'll need to sure up their defensive zone play.

Some Love for the Ladies: No news from the ice for the ladies in this update. The first set of rankings came out this week, and the Lady Icers found themselves at #7. Looking ahead at the schedule, the next game is November 11th, when they travel to the California University of PA for a game, then return to State College for a weekend set against ECWHL foe UMass on that Friday and Saturday. They get another lengthy break before playing Dec 6th against NCAA DI Elmira College's JV team. (What does that make the JV team? I have no idea.) That will take the ladies into the winter break, and then they prepare for a busy January and February.