Icers Recap - The Season in a Weekend

Share All sharing options for: Icers Recap - The Season in a Weekend

Two games on back to back nights say it all. One game was what should be; the next day was the reality. It actually makes me long for the days (read: last season) when the team would play all the teams the same - let the opponent keep it close, and then squeak out a win late in the game. Instead, they blow out the easy teams with goal differentials of over 10 goals, yet struggle mightily with the better teams. At least with the old way, the Icers were always had a chance to win. The Delaware weekend showed both sides. Friday's game showed an early domination, with a mellowed finish. Saturday's game was like any other against a quality opponent - never really in it from the start.

With Madrazo getting the start between the pipes, the Icers looked to give him some extra offensive help. Just under two minutes into the game, Taylor Cera would give the Icers the early 1-0 lead, with an assist from George Saad. About two minutes later, Tim O'Brien would steal a puck in the offensive zone and wrist it past the Blue Hens goalie. O'Brien would score again just seconds later, forcing Delaware to switch goalies and take a time-out to hopefully slow down the Icers offense. The rest of the first period went scoreless, giving the Icers the 3-0 lead after the first period. George Saad would extend the lead to 4-0 early in the 2nd period, and Madrazo would come up with a couple of huge saves to keep the lead at 4. The scoring would come to stop, but the physical play picked up, setting up an interesting game for Saturday. The win was Madrazo's second straight shut-out win, and it was also Delaware's first regulation loss this season. 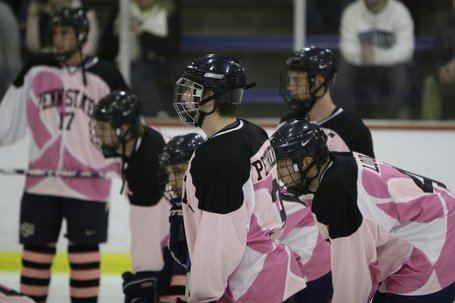 It's the pink and blue striped socks that make these special jerseys so awesome.

Riding the hot glove, Coach Balboni decided to put Madrazo back in net to take on the Blue Hens in the hopes of a big weekend sweep. Both teams would control the offense at times early in the first period, but it would be Marek Polidor who would get the first goal, giving the Icers a 1-0 lead. The Blue Hens would regain the offensive advantage and eventually get two goals past Madrazo, taking a 2-1 lead into the first intermission. As the second period started, the wheels on the Icers bus completely fell off, as the Blue Hens would score 3 quick goals early in the 2nd period. The five goals would force Madrazo from net, giving Teddy Hume some more playing time. Delaware would get another goal before the physical play picked up. The Icers would eventually get a goal late in the 2nd, thanks to George Saad, but the Blue Hens would respond again. Except for some late-game fisticuffs, there was little action to be had in the third period. After a solid Friday outing, the Icers looked downright pathetic on Saturday, as the Blue Hens rolled to a 7-2 victory.

Admittedly, I missed much of this game (I was out enjoying my last December in Milwaukee). And while I was returning to my apartment to start watching that game, my only thought was that I hoped for no "Oh Crap" moment when I turned on the game. Thankfully, the Icers had taken care of that. With Madrazo back in net, the Icers would return to their high-octane offense against a weak opponent. After the two teams would swap goals midway through the first period, the Icers would rattle off 7 unanswered goals (Daley x2, Morrone, Cera x2, Collins, T. O'Brien, Winchester) to blow open the game, leading to a big 8-1 win against the lackluster Niagara Purple Eagles.

News and Notes:  This team really is a riddle, wrapped in a mystery, inside an enigma. They have the skills to do well, but they just don't seem to have the energy or drive to get it done right now. The Friday night game at Delaware looked to be a turning point for the Icers, but a lousy defensive performance, some more shaky goaltending, and an offense that shuts down when behind just showed that they still aren't a quality team. Maybe they have a bulls-eye on their backs because of the announcement, or maybe the announcement has just gone to their heads. Either way, they are just bad right now.

The goaltending still struggles. I'm not going to place a lot of blame on Madrazo - he had a 170-minute shut-out streak going until that first goal allowed against Delaware. But what happened for the rest of that Saturday game against Delaware is just the risks you take by starting a freshman goalie - an occasional mental shutdown which leads to some sloppy goaltending. Madrazo has shown definitely shown signs of being a top-notch goalie in the future, but not quite yet. Hume is still shaky and basically unreliable at this point. Ivanir and Jay really should be getting more ice time.

The goaltending can't take all the blame, however. The defense is just lost sometimes. Well, a lot of the time, really. They're not covering properly, they're not making the smart/crisp passes to get out of the zone, and they're just scrambling in the defensive zone time and time again. There's talent abound in the defense, but they just need something different - different pairings, different scheme. Anything to change something that is very broken on this team.

As the calendar year turns, the Icers are looking to spend nearly the entire month of January away from State College. The second half of the season opens with the annual trip to Ohio, followed by three weekends against ESCHL opponents - Robert Morris (PA), West Chester (which is actually a home-and-home), and Delaware. February continues the ESCHL schedule, with home weekends against Rhode Island and Robert Morris. The ESCHL playoffs are the next week, and then the regular season closes with a gimme-weekend at home against Rutgers. It's going to be a very tough road, and one where the Icers will need to win almost all of those games to ensure they don't miss the ACHA tournament this season.

Some Love for the Ladies: All quiet on the women's hockey front, for the most part. The only game since November 13th was an exhibition game against Elmira's JV women's hockey team. Now, I have no idea how to handicap a JV team, but the Lady Icers took it to Elmira JV, winning 4-2 on the road. And a win is a win, regardless of who they're playing. The win is the fifth in a row for the Lady Icers - momentum they would like to continue into the new year. The Lady Icers start the new year on a 7-game homestand, opening with WCWHL opponent Rhode Island on the 7th and 8th of January. The ladies have games every weekend starting with URI through the ECWHL playoffs at the end of February. It will be a busy two months for the Lady Icers as they set their sights on a run at the ACHA tournament in March.