Nitt Links: Going Gator Hunting In The Outback Without A Compass

Share All sharing options for: Nitt Links: Going Gator Hunting In The Outback Without A Compass

I just want to make the joke now. Pitt is headed to the Compass Bowl because their program has no direction. I'm sure somebody got that joke in print before I did, but if you're in need of a real zinger around the watercooler, there you go. And there's Michigan. Headed to the Gator Bowl to play a team that beat Florida while only attempting 9 passes. If you're looking for a good time, watch a bad Michigan defense get lit up by a offense that isn't trying hard to do anything but run the ball over and over again.

It wouldn't be the season end without somebody telling us "You remember the quarterback controversy?" and "Did you know Joe hasn't made an in-home visit since 1854?"

I hope he can match the level of crazy that some of the current Big Ten coaches operate at. Bill Lynch getting the boot really hurt the crazy meter though. Don't know what I'm talking about? Look after the jump.

If there is one thing Joe is good at, it's getting ready for a bowl game.

Women's team is actually pretty good this year. 7-2, and a lot of tough wins. If you remember the Kelly Mazzante days this could be a year to keep an eye on.

This is a few days old, but yet another chapter in the book of "This story is moving along at the rate of -1 story a month"

Michigan's Dave Brandon: 'Passion and emotion was evident at the banquet'

From quoting a Bible passage to playing Josh Groban's song "You Raise Me Up" over the speaker system to the final hand-holding with the team and everyone on the dais, it was a memorable evening that created buzz around Metro Detroit and among Michigan fans on Friday. 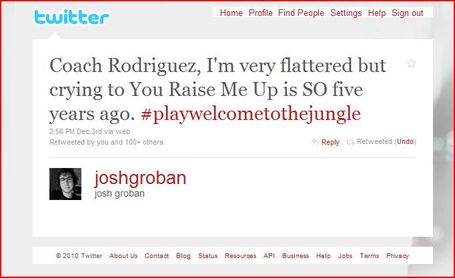