Pitt And Why Calling Something Reliable Doesn’t Make It So

Share All sharing options for: Pitt And Why Calling Something Reliable Doesn’t Make It So 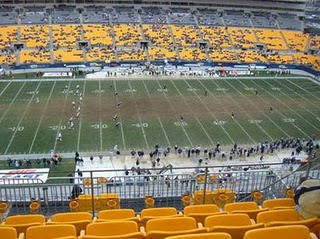 Obligatory Yellow Out photo and now obligatory discussion about things I've been reading in the internets that claim Pitt is a signed, sealed, delivered member of the Big Ten.

I've dug up everything I can find in actual information here, attempting to cancel out the noise, and this, my friends, is the rock this rumor is founded upon:

Here is what popped up on Bleacherreport.com, normally a pretty reliable outlet, just a few hours ago:

The rest of this un-linked blog post from a Kansas City Star stepchild is a quote from an actual bleacher report article that is no-followed here:

"According to several reports, including personal statements by student athletes on Twitter, Pittsburgh athletic department officials held closed door meetings with all of the University's student athletes last week about the potential move.

Pitt message boards lit up with the news and the validity of the rumor, and though not verified by the University or the Big East or Big Ten, the rumor was somewhat reinforced when those Pitt athletes who posted about the meeting on their Twitter accounts were forced to remove the posts."

The only other mildly interesting "report" from "outlets" shows up on a free Scout board, and uh, it's not exactly convincing:

Well, enough with the preamble. I have heard from what I deem to be a reliable source that the Pitt to big ten rumors have much more substance than many on this board understand. Gene Parmesan one of my favorite posters in particular believes that Pitt is not even thought of. Well, Just minutes ago I received a message stating "Pitt to Big Ten Announcement this Friday". I trust this source and believe in his contacts. I also have been wrong on some things before and was reluctant to post this. But I am willing to go out on a limb here. I don't necessarily believe the announcement will come this friday, but I do have enough voices telling me this is likely going to happen.

I may be eating a lot of crow with egg stuck to my face for this might just be the offspring of talking heads, but too many people I trust have told me.

The other headlines I'm getting as of Sunday night: Rumor: Pittsburgh to Join Big Ten, Pittsburgh to Big Ten Rumors Heating Up,  If It's on the Internet, It's True, and Pitt To The Big Ten? So Says...Someone...I Think....

So in summary: a guy who works for the Kansas City Star posted an unlinked quote on a newspaper "blog" referencing a Bleacher Report article from a guy who has never broken a single bit of news in his life.  That quote was then rampantly and recklessly spread on twitter and other message boards, with more conflicting facts but no verifiable sources.  And here we are, the same place we were two days ago.