Jim Caldwell Is Somehow Still Under The Radar

Share All sharing options for: Jim Caldwell Is Somehow Still Under The Radar 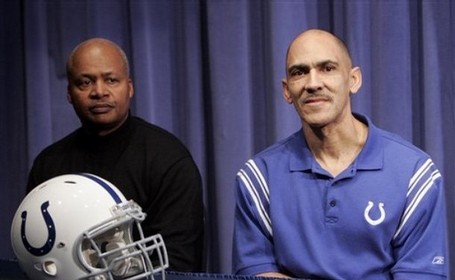 Who the bleep is Jim Caldwell?

Jim Caldwell was the guy on your TV Sunday night not showing any emotion.  The guy who looked like he forgot he was coaching one of the greatest quarterbacks ever to play in the Super Bowl (probably no coincidence, as you'll be told later).

He's the guy that was doing this despite once being pushed out of the frickin' Wake Forest job.  A guy who went 12-52 in league play at that school and called it "maybe one of the greatest experiences of my life."

He's a guy who "knows shadows."  He's just recently stepped out of those metaphoric shadows.  Although not really.

He is both liked and respected:

What does this have to do with me?

I'll step away from the annoying tone and start with Frank Bodani's homework:

Joe Paterno hired him. Fran Ganter guided him. Bill Kenney and Dick Anderson worked alongside him. Jay Paterno played under him.

And Larry Johnson Sr. looked to him as a mentor and roomed with him while working Penn State's summer camps.

Cladwell served as the quarterbacks coach for seven years, no short stint for a position worker, and worked with Kerry Collins, Matt Knizner, and a couple of Saccas.  And Jay Paterno.

To get to the answer: Jim Caldwell is a football coach with Penn State ties, and by all accounts he's very good at what he does.

But the college game, it's different.  What makes you think he can recruit like Nick Saban?

And therein lies Caldwell's greatest asset: he can't, and won't, recruit like Nick Saban.  Nothing should make you happier.

Caldwell is the kind of guy who says things like, "But nevertheless it still boils down to they have an outstanding football team and so do we."

The kind of guy who "To make a correction...is more likely to get in a player's face."

Alright sorry I'll stop.  He's going to do things the Penn State way.  It's going to be harder and harder to find people both successful and willing who aren't also undesirable shades of Urban Meyer.

Hey crack smoker, no seemingly-successful NFL coach who just took a trip to the Super Bowl is going to want to coach your school.

Meh, things change.  Coaching is a fickle profession and if anyone wants to start making bets that pay when coaching ends in stability, well I'll take that action every time save one.  (Well maybe two.  Maybe.)

Look at Jim Tressel, arguable the most stable active coach still holding down the fort.  He was lampooned for using a quarterback who went to Ohio State specifically to be used that way, and it took the Big Ten's first Rose Bowl win in 10 years to return everyone back to "oh sky is not falling" mode.

All I'm saying: you're one Failsman against Proverbial Purdue away from losing the mob.  You lose the mob?  You lose everything, and it often happens quickly. 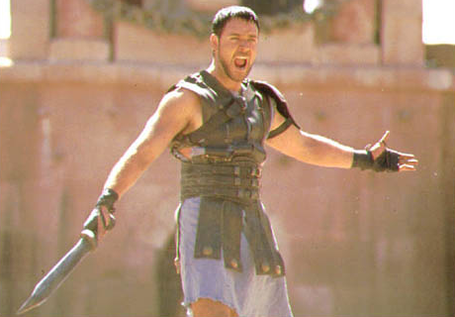 Are you not entertained?

So Caldwell lost this one...maybe he makes another mistake next season and then again in the playoffs.  All of the sudden Indy isn't winning championships and Peytonville isn't happy.  I wish the man success, not failure, but I can't control events and if things go mediocre, well all of the sudden Caldwell is available.

I'm going to irrationally take this as an insult to Scrap and LJSR.  What do you have against two lifers who deserve it?

Nothing, you irrational fictitious blogging crutch.  Bradley and Johnson's successes are well documented here and their front-runner status is no sham.

However, when the time comes, let's take the camera out of narrow angle view.