Welcome to Part Two of the Recruiting Report. Today we look at three offensive line commits from the state of Pennsylvania. All committed within a month of each other (and right on the heels of Silas Redd's commitment), confirming the age old adage that when it rains, it pours.

The first of the Pittsburgh area linemen to commit to Penn State, Graham was receiving early interest from Pitt, Northwestern, Illinois, and Duke before picking Penn State in early May. His father attended Penn State, so early reports were confident that Graham would commit early.

A well rounded athlete, Graham will likely play guard once he gets his weight and physicality where they need to be. He will probably have to add some weight, but most reports say that he is built well and will be able to handle the extra bulk easily. With a 75" wingspan, Graham should be a future beast in the trenches. He is fresh blood in a depth chart that is really deep, but with the added weight and agility he should be able to make a push for some serious playing time very soon.

On the plus side, most analysts believe that Graham is quick off the ball and has excellent feet. He is quick and has those long arms necessary to keep aggressive pass rushers at bay. More importantly, though, are the reports that he is a quick learner, a leader, and someone others look up to for guidance. Graham certainly projects as someone that will succeed at Penn State, despite the fact that he admitted to enjoying Fire Flies by Owl City. We can look past that, for now. 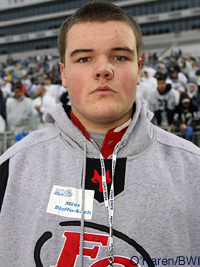 The second Pittsburgh area lineman, Dieffenbach comes from Fox Chapel and is primed to one day take over the anchor of the offensive line, the center position. Miles heard early from Penn State, but was also talking to Pitt, Notre Dame, Ohio State, Michigan State, and Alabama, among others. He has a great build, and moves light on his feet. While he could probably play anywhere on the line, he'll certainly be the center of the future. When that future becomes a reality is up to the coaches.

Miles' father is the tennis coach at Pitt; he was quoted early on as saying Pitt was "his favorite." Well, things change when you visit Penn State. Following at least two game visits and at least one coach/facility visit, Miles began singing a different tune, and suddenly Penn State was high in the Miles Dieffenbach race. Landing the #1 Pittsburgh-area lineman would certainly go a long way to increase the recruiting of this fertile ground of high school players.

Then, on June 2, Miles selected PSU and made Pitt Nation see red when they not only let a star recruit out of their WPIAL grasp, but also a Pitt legacy. To make matters worse, Pitt would lose at least three more WPIAL kids to Penn State in the 2010 class (not to mention the three already mentioned). Stay tuned.

To say this kid is a beast is an understatement; he is the epitome of trench warfare. He doesn't have the weight of some of the more nationally acclaimed OLs, but he is cut from the same cloth as AQ and Wiz. Remington Trophy Award winner AQ Shipley was not large by any sense of the word. I'm just saying. This kid has future All-American written all over him. He played in last years Under Armour All-American Game, was named to the PPG Fabulous 22 Team, and tore up combines all over the east coast. 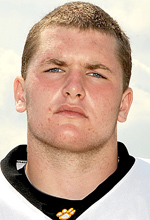 Like I said above, when it rains, it pours. Unfortunately for Pitt, when it rains Penn State recruits this year, they pour out of the WPIAL. Like Dieffenbach, Tom Ricketts is from a WPIAL school (North Allegheny); and like Dieffenbach, Ricketts is a Pitt legacy (Ricketts' father was actually a first round pick for the Steelers, as well, AND his mother was a Pitt swimmer, AND they have Pitt season tickets). Eventually, some of these signings have got to hurt the Panthers. But I digress. Tom also heard early from Standford, Illinois, Boston College, and, obviously, Pitt.

Tom is a tall lineman, but currently lacks the necessary weight. Luckily, he has the frame to easily put on the needed weight to be a bookend of a future PSU line. Like Dieffenbach, he has the raw tools to be a solid lineman at Penn State (quick feet, long arms, good range of motion). However, like Dieffenbach, and some other recent Penn State linemen, Tom will have to bulk up; once he gets into a collegiate weight room and nutrition program, he'll fill out nicely and Penn State will have a solid front for some time.

Unfortunately, Tom attended the Iowa and Ohio State games in 2009. Luckily, his dedication to the blue and white did not waver. Losses come and go, Ricketts understands that. However, it is hard to overlook the staff, facilities, and fellow recruits that Ricketts has with Penn State. Ricketts was on the Pennsylvania team for the Big 33 game (along with the aforementioned Mike Hull and the soon to be mentioned Alex Kenney) and was named Pennsylvania High School Football AAAA All State First Team.

That is all for today. Next time we'll look at three nasty defensive linemen from three different states, all of whom committed within two weeks of each other, and all of whom should push early for playing time. Stay tuned for Kyle Baublitz, Evan Hailes, and DaQuan Jones.