Looking to wrap up the ESCHL regular season title, the Icers headed down to Philadelphia to take on a weak Drexel team. They'd have to complete the weekend without #2 scorer Dominic Morrone, who is out for a few more days after having his appendix removed. (I hope he called it Pinky, and then had an awesome dream where he hung out with his removed appendix for the day.) It should be healthy to start practicing during this week, and hopefully he'll be ready for the ESCHL Tournament this coming weekend. For now, he's just one of many Icers fighting the injury bug, but the Icers were still ready to take on Drexel and collect a 3rd straight ESCHL title. 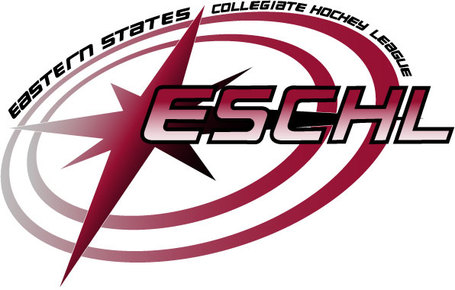 Because this is about as excited as I get for league play....

February 12, at Drexel, 8-4 W: The game had some great action early, with the Icers jumping out to an early 1-0 lead on the stick of Ryan Paradis. Carey Bell would extend the lead with his first goal of the season. A Drexel goal to cut the lead to 2-1 was apparently some sort of wake-up call for the Icers, as they would follow up with three straight goals (Mike Broccolo and two from Chris Cerutti) to take a commanding 5-1 lead into the 1st period intermission. Nick Seravalli would extend the lead to 6-1 early in the second period. But then the Icers started getting too laid back on the 5 goal lead. Two late Drexel goals would cut the lead to 6-3 heading into the 3rd period. Drexel would keep their pressure up, cutting the lead to 6-4 halfway through the 3rd period. But Paul Daley would stop the bleeding with a goal a few minutes later, bringing the lead back to 7-4. Cerutti would cap the scoring by getting his hat trick goal while shorthanded, giving the Icers the 8-4 victory. The win clinches a few things - the ESCHL regular season title; the #1 rank and first round bye for the ESCHL Tournament; and the autobid for the ESCHL into the ACHA Tournament.

February 13, vs Drexel, 5-1 W: After some great and diligent work, the troops got the video up and working for live webcasts of the Icers games. And kudos to them for all of this - many thanks from this (current) transplant. As for the game, with the important pieces already clinched, freshman Dan Ivanir would get the start in net. The chippy play from Friday night's game continued into the Saturday game, as both teams would take a few penalties and give a few extra pushes after the whistle. And although the Icers would dominate in terms of shots (22-4 for the period), it wouldn't make a difference until the 13 minute mark, when Joe Zitarelli finally put one past the Drexel goaltender for the 1-0 lead. A few minutes, a Drexel defensive-zone turnover would be turned into an Icers goal as Ryan Paradis would extend the lead to 2-0. The Icers would keep the pressure up in the 2nd, with Kurt Collins putting home a sweet feed from Nick Seravalli, pushing the lead to 3-0 just a few minutes into the 2nd period. An Icers penalty would be turned into a quick Drexel goal, cutting the lead to 3-1. Paradis would respond a few minutes later with his second goal of the game, once again extending the lead to three goals heading into the 3rd period. The 3rd would be more of the same, with Paul Daley extending the lead to 5-1. The rest of the game would be a string of chippy play and some stupid Icers penalties, but nothing would result in any more scoring, giving the Icers the 5-1 win and weekend sweep of Drexel. 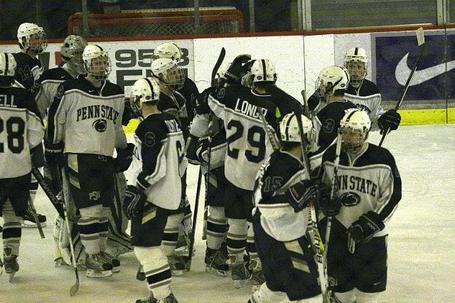 You can never have too many pictures of happy celebration.

Reflections and Ramblings: Final rankings come out on Friday, and then we will know for sure who is in and who is out of the tournament. Seven spots have been clinched - Penn State, Ohio, RMU(IL), SUNY Canton, Stony Brook, Slippery Rock, and Rutgers. Only PSU and Ohio are in the top 16 currently, and Stony Brook might be the only other team that slips in with the final rankings. Either way, top 11 are moving into the tournament, and this past weekend was very interesting to see who might make those final spots. Last week, I said the top 7 were in, and nothing this weekend really changed that. As for the others, Oakland got their much-needed sweep; Minot State was able to split with #5 Iowa State; Arizona State's weekend set with 'Nova was canceled due to weather; and URI got swept by Stony Brook. On the outside looking in, Adrian got their much-needed sweep over WMU, and in shocking fashion, Central Oklahoma swept Illinois. My guess - final 4 spots go to Oakland, Minot State, Adrian, and Central Oklahoma.

On to the important stuff - the video is now working! So for anyone who has been hoping for some live, video-streaming action of the Icers, we've got it. The story is here and the UStream link is here. They are expecting to have the live video for the ESCHL Tournament this weekend (for the Icers games) and the Robert Morris (PA) games the following weekend. After that, I'm assuming that the ACHA will bring back their website-of-choice for streaming the National Tournament games - I'll post those links once I find out what/where they are.

Speaking of the ESCHL Tournament next week, there's not too much to discuss really. It's just for an extra trophy, and ultimately won't have any effect on the National Tournament. As far as I can tell (because apparently properly updating websites and standings is a hard job), Friday has the two quarterfinals of Drexel vs. West Chester and Navy vs. host Delaware. Winners of those games will go on to face Penn State and Rhode Island on Saturday, and then the winners of the semis will square off on Sunday for the championship. Since this is the first time the league has had 6 teams, I'm not sure if they are running a straight-line playoff or a "top seed plays the lowest seed" style. Either way, the Icers will either see Drexel, Navy, or WCU, and all three are opponents the Icers with which they should have little trouble. For the championship game, I'd rather face URI over the host Delaware team. However, if URI slides into the ACHA Tournament, I'm more than willing to kill any momentum URI might have with a semi-final loss to UD. And yes, the Icers will be going for the 3rd straight ESCHL Post-Season Title as well.

Keeping tabs on the female counterparts, the Lady Icers split their home weekend set with UMass, dropping the Friday game 3-1, while bouncing back with a solid 4-1 on Saturday. The Lady Icers, with an overall record of 9-11-1, have their final home set of games this weekend against the University of Buffalo. From there, the ladies begin play in their post-season tournaments.