Icers Try to Keep on Streaking

Share All sharing options for: Icers Try to Keep on Streaking

When we last left the Blue Hens, you might remember a 6-0 blowout win for the Icers that included the Delaware goaltender being tossed for trying to fight with Teddy Hume. Good times, good times. While there wasn't an expectation to see a repeat of the fighting and goalie tensions, there was good hockey in the air. As a few player notes, George Saad is out "with a knee," and Eric Steinour didn't make the trip due to an illness. Pressing on, let's take on the Blue Hens.

January 29, @ Delaware, 1-0 W: The first period was filled with energy, but a number of whistles and a few penalties killed any attempts at sustained pressure. The Blue Hens would had some of the better chances at the end of the period, but the game remained tied after one period of play. After some more back and forth play, the Icers would finally break through six minutes into the 2nd period thanks to Rich O'Brien. Again, more chances for both teams, including a spectacular save made by Teddy Hume. However, the Icers would maintain their 1-0 lead heading into the 3rd period. Not surprisingly, the 3rd stanza would play out much like the first two - good energy, and some good chances by both teams (especially on their respective power plays). But both goalies were up to the task, which played into the hands of the Icers, giving the Icers the 1-0 win, and Teddy Hume is 2nd shutout of the season (both against UDel). 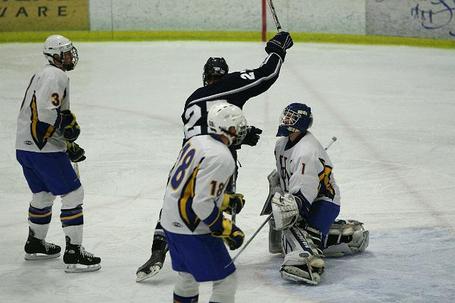 January 30, vs. Delaware, 4-2 L: Looking to lock-up a first-round bye in the ESCHL tournament, the Icers were prepared to take the season sweep over the Blue Hens. Both teams came out with energy, but the Icers were able to sustain it better than Friday night's game. Halfway through the first period, Tim O'Brien help push a Kurt Collins shot past the UDel goalie for the 1-0 lead. But the Blue Hens, knowing their post-season hopes were on the line, wouldn't be silenced so easily, converting an Icers turnover into a goal just 75 seconds after O'Brien's goal. Both teams would get more chances, with Delaware getting help from continued poor play by the Icers in their own zone, but the game would go into the intermission tied at 1-1. The Icers continued to mix good chances with sloppy play, and the Blue Hens would take advantage of another turnover, giving Delaware the 2-1 lead 9 minutes into the 2nd period. With the energy now on the Blue Hens' side, Delaware would continue the scoring, extending the lead to 4-1, also forcing the coaches to pull Teddy Hume and give Dan Ivanir some more playing time. From there, the Blue Hens would spend much of the rest of the game playing the "Don't Screw Up a 3 Goal Lead" style of play. The Icers would get another goal late in the 3rd period (due to a bad internet connection coming from Delaware, I was unable to hear who scored, but I believe it was Tim O'Brien's 2nd). But it was too little too late, as Delaware would take the 4-2 win, keeping their playoff hopes alive.

Reflections and Ramblings: Updated ACHA Rankings come out on Friday, and I don't see any major changes on the horizon - six of the top seven teams split their weekends. The interesting thing to watch in the upcoming weeks are the autobid teams and the teams in the teens in the rankings. Currently, Robert Morris (IL) gets an autobid as the host, while Stony Brook (ECHA) and Canton (ECHL) have already clinched their conference autobids. However, this use of conference autobids can be a negative, as all 3 current autobids are ranked outside the top 16 (21st, 18th, and unranked, respectively). Of the four remaining conference autobids, two (ESCHL and CSCHL) are likely to be won by a team at the top of the rankings, while the other two will likely be outsiders keeping more of the higher ranked teams out.

So that's the Eagles, Sea Wolves, and ...Kangaroos? Seriously?

There are two more rankings coming out - one this coming Friday, and the final one to determine the tournament on 2/19. I'll do a review next week of the rankings, and my projections of who's in, who's out, who's on the bubble, and who's getting worked over by the system.

When the next rankings come out, the Icers will be preparing for their next big opponent, URI. It's a home weekend and "Alumni Weekend" for the Icers - it will be the celebration of 70 years since the start of Icers hockey (sadly, not 70 years straight, but so it goes). URI has had a bit of a back and forth January - after sweeping WCU to start the month, they split with UDel, got swept by Oklahoma, and swept Navy last weekend in two closer-than-necessary games. The Icers will need to win at least one game in regulation to have a chance to win the ESCHL regular season title; winning both games in regulation will clinch that title. So, some extra incentive for the guys, if playing in front of some of the great alumni wasn't enough.

As an administrative change, assistant coach Bill Downey will be stepping down at the end of the season. Great player, great coach (if only for a couple of seasons), and his presence will be missed around the program. At the same time, we wish him and his wife the best of luck in Boston!