Before we start talking about basketball, remember that we're running a 46 hour THON open thread below.  Either scroll down, or click this link to check out what's going on at the BJC, and if you haven't donated yet, head over to THON.org to do so.

Now, onto the sports business.

The Nittany Lions have been plagued by inconsistent offense all season.  Far too often, runs have turned to droughts that have doomed Penn State, while other times, droughts have turned into runs that have come up just short.  But for a nice change of pace, Penn State won it's second straight conference game Saturday night, a 55-51 win over Michigan in Ann Arbor despite another streaky night.  The Lions' balanced attack was led by 14 points from Talor Battle, and perhaps a small contribution by Lady Luck...

Penn State and Michigan traded buckets early before the Wolverines staked themselves to an early nine point lead with 13 minutes to play in the first half, but Penn State clawed back to and 18-18 tie in a little less than four minutes.  Three minutes later, the Lions again found themselves down by nine, but managed to pull off a second run to tie Michigan by halftime at 29-29.

Coming out of the half, Penn State raced to its own nine point lead, going up 53-44 with about 8 minutes to play.  Then things flat lined....literally. 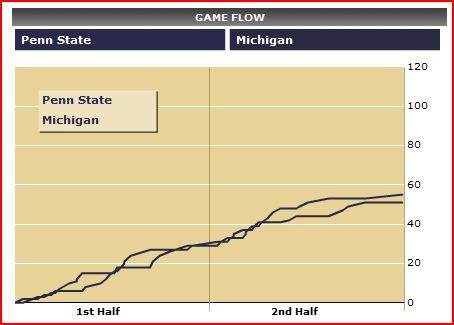 Penn State scored two points in the final eight minutes or so of the second half.  That was it.  Fortunately, though, Michigan apparently wasn't interested in scoring either, drawing only to within two despite the Penn State difficulties on offense.  For once, the Lions' streaky scoring didn't do them in.

For the second straight game, the Lions showed a very balanced scoring attack.  Battle's 14 points were followed by 10 points from Andrew Jones and nine points each from Jeff Brooks and David Jackson.  Saturday's win was without a doubt Brooks's best performance of the Big 10 campaign, creating a lot of offense off the dribble and finding his teammates to lead the forwards with three assists.

Defensively, Penn State locked down, especially in the second half.  Sure, there were still the rotation problems that we've become accustomed to, but the Lions were aggressive and active, which may have gotten under Michigan's skin, and forced them to go cold in the second half.  "Pesky" would be a good way to describe the effort.

Penn State out shot Michigan 49%-35%, not numbers you'd expect to see out of a four point game.  But with 13 turnovers, some of them pretty ugly, Michigan was able to hang in with the Lions right down to the wire.  Two of the worst turnovers were committed by Battle and Tim Frazier, who both watched their mistakes get taken the other way for thunderous dunks.  The Lions were their own worst enemy Saturday night, and with a little more control of the ball, they'd have beat Michigan going away.

Obviously, the scoring droughts were a big deal in this game.  Even if Penn State is beginning to play better, it's not exactly encouraging to see them the team fall down by nine twice, then fritter away a nine point lead to a team shooting under 40%.  The Lions have done a good job of finding offensive balance over the last two games, now it's time to master consistency for a full 40 minutes

Andrew Ott and Bill Edwards have gone almost completely missing in action after suffering injuries in the last couple of weeks.  Ott played six minutes Saturday, and Edwards three after the pair had emerged as perhaps the two most consistent Lions behind Battle and Jackson.  Of course, in their absences, Jones and Brooks have begun to find themselves, but it's still disappointing to see two players who have come a long way this season unable to finish strong because of injury.

The fun and games are over for Penn State now.  After playing and beating two teams on their own level in Northwestern and Michigan, the Lions will now face all three Big 10 title contenders, Ohio State, Purdue, and Michigan State, in their next four games starting with the Buckeyes at the Jordan Center Wednesday night.  The cool thing is that Penn State could ruin Big 10 title hopes for any one of those teams with a win in one of these games.  After basically knocking Northwestern out of NCAA Tournament at-large consideration, Penn State has the chance to spoil an even bigger prize for another conference foe before heading to Indianapolis in a couple of weeks.