Welcome to Part Three of the Recruiting Report. Today we look at three defensive line commits from across the Eastern seaboard.These three continued the booming month of June in terms of PSU recruiting. All are four star recruits, and all project to play on the defensive line (Baublitz was also being recruited as a TE). LJSr has, once again, brought in a killer line. 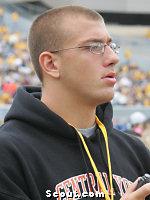 From York, PA, Baublitz has the tools to become either a TE or DE with the Lions, but projects most likely on the defensive side of the ball. Baublitz held an impressive interest/offer sheet during his recruitment, including schools such as Oregon, Oklahoma, WVU, Florida State, and, you guessed it, Pitt. He attended PSU games vs. Indiana and Michigan, so he knows what winning football looks like. Baublitz was recruited by LJSr, a man I trust more than my own father, at least as far as defensive linemen go. If LJSr says this kid can play, that word is good enough for me.

Baublitz played MLB in high school but will likely slide into the Maybin-type DE pass rushing role once he sees the Beaver Stadium field. He is big, but he is quick and has a nose for the football. Baublitz reminds some of an Odrick or a Sean Lee in that he can spread the field, pursue the ball, and generally get after it from any spot. He will line up strong side, but will routinely be in the QB's back pocket on a weak side scramble. Essentially, he is a Penn State DE typified.

Kyle's dad is a teacher, and Kyle himself mentioned that academics were a very important factor in deciding on a school. Another recruit with a completely level head on his shoulders, the Penn State 2010 Recruiting family got a little bit bigger when Kyle committed in June. While I'm extremely confident in the other 6 recruits covered so far, Kyle may be a frontrunner for favorite as Kyle was an outside hitter on the Central HS volleyball team. He was also a repeat First Team All State in Class AAAA, making the team as a DE. Showing his dedication, Kyle is already at PSU, enrolling in January to get a jump on spring practices with the team. Once again, and as you'll see in the rest of this edition of Recruiting Report, the defensive line is SOLID for a few years to come. 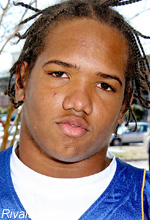 From the fertile football grounds of Chesapeake, Virginia, Evan Hailes is a defensive line nightmare in the making. Early in his recruitment Hailes was hearing from WVU, Tennessee, LSU, VTech, among others, so he was certainly a highly sought after prospect. However, like the allure of the sirens, the calling to play for Penn State (and one of the best defensive line coaches in America) was too much, and Hailes committed in mid-June.

An Under-Armour All American, and member of a state championship high school team, Hailes most likely projects as a DT under LJSr. The depth chart above him is tenuous, so Hailes (and DaQuan Jones) can both make a push for early playing time. One of the two will likely redshirt, but whichever one makes the push, the middle of the defensive line should be solid for awhile. Ogbu, Still, and Ware will make their case, and the starters will probably come from that group. However, expect Jordan Hill and one of these dynamite freshmen to contribute early and often.

You would think that I would get tired writing the same thing for every one of these recruits, but Hailes, like many before him on this report, comes to Penn State with an extremely level head. "To start with, I had a lot of options. But Penn State always talked about me getting my degree, not just being a football player. They treated me like family. Everything was right." It is refreshing to know that some of these kids, in addition to being monster athletes on the gridiron, are also interested in the world class, free education they are receiving. Further, like some already mentioned, Hailes is already on campus, working out and set for spring practice. Look for him at the BW game.

In terms of actual football ability, Hailes seems to have a nose for the football, amassing 81 tackles and 9 sacks his junior year, and being named to the all state team in each of his last three seasons in high school. Much like departing Jared Odrick, Hailes will command double teams, but will be able to shed the blockers with agility. He will be a force to be reckoned with on a defensive line that is constantly one of the best in the nation. 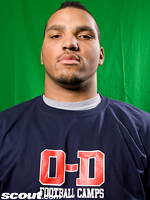 I'm pretty sure I've got LJSr's recruiting tricks down - he recruits all star linemen (even if he's not the point-recruiter, these kids will be playing for his line, so he's got some say), but tells them not to commit right away. Then, at a predetermined time during their recruitment, LJSr has all of them commit at the same time, creating a vortex of talent to rain upon State College (figuratively, of course). In 2009, only CJ Olaniyan missed the memo, as Jones became the third highly touted defensive line project in two weeks to commit to play for LJSr. Two other linemen, one from Staten Island and one from Philadelphia, would have been nice additions to the line in this class, but I'm nothing but happy with LJSr's recruitment this year.

Hearing early from many big time schools (UF, USC, Michigan), Jones was projected at guard, his position in high school. However, with his quickness and high level of football acumen, Jones was also being recruited as a DT, the position he will likely play at Penn State. He is quick off the ball, but has the patience and knowledge to read out a play and pursue with a vengeance. As stated above, either Hailes or Jones will redshirt, IMO, but watching the battle unfold should be fun. One (and probably both) of these guys will be a household name real soon.

Like Hailes, Jones has a level head on him rivaled only by former Penn State greats. Early in the recruitment process, Jones' grades appeared to be an issue. However, Penn State sent Jones an offer after receiving his SAT scores. If the grades are good enough for JoePa, they are certainly good enough for me. Jones then talked about the "honor" it would be playing for LJSr. Further, in a day when entourages and sketchy family connections seem to dominate the recruiting landscape, its nice to hear comments like this: "I was at work when the letter came in. They called me at work and told me he was accepted. I just broke down crying honestly. For me I just wanted him to get an education. That was my main thing. Football was always secondary in my household. It's a blessing for me," said his father Steven Jones.

When I was in college, we had a friend that was a larger gentleman, whom we always joked gave the best bear hugs. We would routinely walk up to random women and use this line for our buddy. "Hey, see that kid over there {points to out of breath fat kid with two 40's in his hands}? He gives the BEST bear hugs." Sometimes it worked, sometimes it didn't. What my friend lacked, though, was a Top 5 position ranking and the ability to play for JoePa, as DaQuan Jones, by all accounts, is the African-American version of my friend, only with awesome football abilities:

More than a few have likened him to a teddy bear, 6 feet, 4 inches and 300 or so pounds worth of likeable, cuddly Big Ten Conference-bound tackle. He speaks softly and carries a big smile, one he displays easily, naturally and with regularity. The moniker to which he answers - "Dae-Dae" - suggests little-boy cute rather than mountain-sized sack master and destroyer of all things in the A-Gaps. "People say I'm too nice to be on the defensive line, but there are two ways to play the game of football," said Johnson City High senior DaQuan Jones. "You can be a mean brute like most guys, or you can play smart, high-energy, have fun playing.